Tell me about yourself, Tuppence .

Starting with the deep question. I'll start with a safe subject, reading. I don't remember not knowing how to read. According to my mother, I taught myself when I was three. Since then, I've almost always had my nose stuck in a book at some point or another. I started writing my own stories when I was eleven, starting with a very bad rewriting of one of the Greek Myths. It's been an obsession ever since. I've saved everything I've ever written, too, which means there's a large portion of memory on my laptop that is all word documents in various states of completion.

As for the rest about me: I was born in Texas, grew up in Germany, spent most of my life in Virginia, and have lived in Hawaii, Maine, and am currently in Ireland studying for my Masters in Medieval Studies. You might say I have an incurable wanderlust, which I completely blame on my father. I have also participated the SCA, a medieval reenactment group, performed at multiple renaissance faires in the Northeast United States, spent four years in the Coast Guard, and invested far too many hours in both video games and pen and paper tabletop RPGs. 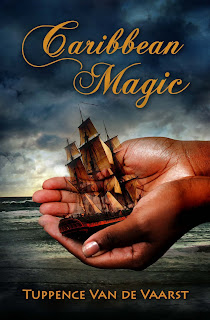 Josephine Crawford is the outspoken and tomboyish daughter of an English plantation owner. Her heritage, however, is much more complicated than her father's. Not only is her mother one of the native Taino, but her mother's blood has left her a legacy of magic. Unfortunately, Jo has very little idea how to use that magic, and it may be too late when a rich gentleman comes seeking to marry her. To escape a marriage of slavery, Jo runs away and finds herself thrust into a life of violence, adventure, blackmail, danger, and passion. In order to survive, Jo will have to learn quickly.

What am I not working on? I have far too many ideas congregating in my head. The foremost among them currently is the sequel to Caribbean Magic, which will center around Jo's brother Miguel. I also am working on a retelling of the Robin Hood legend in a series of novellas. The first one of those, Outlaw's Call, won first place in a short story competition at my community college. Oh, and there's my Master's thesis, which does need to be completed this summer.

As long as I have my laptop, I can be anywhere! I've done most of my writing at various desks in the many places I've lived, but I've also taken my laptop on airplanes, ships, and just outside in the sun. Sometimes I'll also sprawl across my bed and write there. The place isn't the important part of my writing, the ideas in my head are.

That publishing a book is very much like performing on stage. This may seem like a strange statement, but everyone knows about stage fright. I've performed on stage before, and learned to overcome it. When I started the publishing process, however, it was one long drawn-out battle until I finally went for it. Now that it's done, I can enjoy the results, but the preparation and anticipation is far scarier than the reality.

Tvtropes.org. I can spend hours on that site, and it's sometimes good inspiration for story ideas. I dare anyone to go onto that site and not open a dozen tabs and wander down innumerable rabbit trails.