Tell me about yourself, John?

I spent many years working as a high-tech marketing professional. It was rewarding, and I enjoyed much of it. But as long as I can remember, I wanted to write novels. I always loved reading, especially great books that would transport me to another place. I would marvel at how the author could make a story come alive.

In recent years, I began considering plot ideas that I took from my career in high-tech. I would often wonder about the unintended consequences of technology. What might happen if technology developed in a way we had never expected? And then I began to think about how I could write that idea as a fantasy story.

When I left a job last year, I decided to take the plunge and write full-time. I'm so glad I made this leap. The joy of completing and publishing a novel has been fantastic. 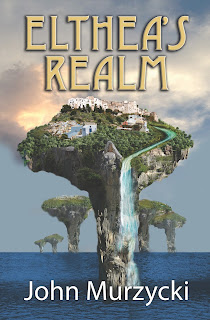 What would happen if a computer virus evolved into something much deadlier than anyone ever expected? That's the underlying premise of Elthea's Realm. The book is part thriller, part futuristic sci-fi, and primarily fantasy.

At the outset of the story, five friends begin receiving messages asking about a college course called The Utopia Project that they took eight years earlier. Now someone wants more information about their involvement in it. The team leader in that project calls them together at his mountain retreat so they can try to figure out what is going on. At this point, the story evolves from thriller to fantasy as the friends are rescued from potential danger by a benevolent people who transport them to the enchanted land of Elthea's Realm a place with islands held high above the water by a single pillar. The people who rescued them are called the Astari, and they help the friends understand why they are being pursued by an evil force called the Bots, who continue to attack them even in this paradise.

The Bots will stop at nothing to kill or capture these particular companions. To make matters worse, the Bots begin to wage war on Earth's computer infrastructure. As the story unfolds, we learn more about what might happen if instruments of our technology become more than we can control.

I'm writing the next book in the series. I haven't finalized a title for it yet, but it will continue the adventures of the Utopia Project team. I'll examine the origins of the evil Bots in more detail and why they are so determined to destroy all that is good on Earth as well as on Elthea's Realm. This next book brings us back to the land called Elthea's Realm, and we meet others, including a group of people from Earth who ended up there many years earlier. I'll explore some new races in this land and how they figure into the battle against the Bots. I expect to publish it later this year. Beyond this, I have rough outlines for several other books in this series and some thoughts on a new series that will be a more traditional fantasy.

I wrote the first draft of Elthea's Realm longhand on legal size paper. I would write anywhere. I was so energized with telling the story that I just wanted to get it down on paper without thinking about sentence structure or grammatical issues, or anything else. I just let it rip. Of course, that meant it took me more time to go back and clean it up in subsequent revisions, which I did on my computer at my work desk. That's where I now do all my writing, including first drafts. I like a place that's my own. When I sit at that desk, my mind automatically understands that it's time to work. But I think about plot ideas no matter where I am or what's going on. When a new plot idea or snippet of dialogue comes to me, I often have to stop whenever I'm doing to jot it down.

I discovered that book review sites are overwhelmed by requests for reviews. That's something I hadn't expected. When I first embarked on this road, I thought they would be an excellent way to inform other readers of my publication. What I quickly learned was how saturated they were by requests, and how many of the top sites charged a significant fee for a review. I guess it's only fair. They're in business just as I am. And although they are still an impartial jury weighing in on the quality of a novel, getting entry to their services is not as easy as I had originally thought it would be.

I also believe it's important for an independent author to understand the production process of copy editing, cover design, and marketing. If you do any of these poorly, it reflects on the quality of your writing.

I honestly can't say I have a favorite. I know Bing is a search engine, not a website, but I often look at it on most days to see the photo they post each day and to catch the top stories.

I live in Massachusetts, and I've been a fan of the New England Patriots football team for all my life. So on occasion, I read the ESPN blog on the Patriots.