Tell me about yourself, Matthew?

I was born in Council Bluffs, Iowa and have been writing since I was a freshmen in high school. I became involved in the school’s paper and yearbook. I’ve always enjoyed reading and had aspirations to write my own stories somedays. As a young gay male, there weren’t many books that had strong gay male characters. And those that did always portrayed them as weak, whinny, and overly effeminate. I always told myself that I would change that someday. When I graduated high school I enrolled at UNO in Omaha.

However, I soon discovered that as much fun as journalism is, it wasn’t really for me. I still enjoyed writing but there was something missing. I dropped out of UNO during my second semester and instead transferred to a local community college and took the EMT Basic class (emergency medical technician.) I don’t remember what made me take that class to this day but I do remember the feeling I got when I saved my first life. I was hooked and soon afterward enrolled in Creighton University’s paramedic training program.

After passing my paramedic boards and going to work fulltime, I took up writing again. This was before the invention of ebooks and I kept most of what I wrote to myself. The longer that I worked in my profession, the more that I realized just how important writing was to me. It was a way for me release stress, deal with difficult emotions, and try and make sense of some of the things I saw on daily bases.

Back in 2014, I as poking around on the Amazon site and their link on the bottom that said ‘Publish With Us’, I clicked on the link and did some research. I realized that I could self-publish my own work, though I wasn’t sure anyone would read anything that I had written I was certainly excited to try. I’ve grown, both as a person and as a writer, since my first ebook hit the digital shelves. I’m still working on honing my craft and although I will probably never make enough money to quit my day job (not that I would, I enjoy that helicopter flights WAY too much) but at least I feel like I can tell the stories that I want to tell. That’s the nice thing about being an independent author, I can write what I want without anyone standing over me telling me what to do. 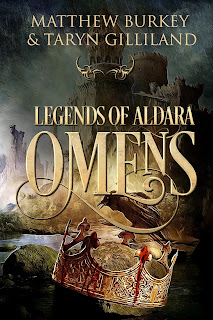 When the King of Geweth is killed, his surviving son must traverse Aldara looking for clues as to who carried out the assassination before all of Aldara is plunged into war.

Welcome to the World of Aldara! When King Nathanial Lionheart his killed after his airship is sabotaged, it is up to his surviving son Kaidan to search through Aldara looking for clues as to who would want the king dead. After waking up in the care of the elves, Kaidan sets out on a journey through Aldara with his best friend, mentor, and a few unexpected allies. As they search the land they encounter danger at every turn, forcing the small group to put aside their differences in order to survive. Kaidan knows that he has to find the truth before things get out of hand and all of Aldara is plunged into war.

Back in Geweth, political enemies of the former king take advantage of the situation and begin their own grab for power. As Kaidan and his companions close in on the truth he will learn something about himself that will change his life and possibility the fate of all of Aldara.

Currently, I am working with Taryn to get the second book of the Legends of Aldara trilogy finished up. We are actually ahead of schedule and have been able to move up the release date from October to mid-August. The two of us are actually working on fleshing out an idea that I had for another science fiction story but it’s very much a work in progress. Beyond my projects with Taryn I am working on finishing up my own solo series of books. The last one entitled The Guardian Chronicles: A New Dawn, should be out sometime in December.

I sort of write everywhere, although I think my favorite place to be in probably in what can loosely be called my den at home. Well, it’s not really den but the spare bedroom that hold my desk and a large amount of Star Wars/Superman memorabilia.

There are a lot of sites that I find myself getting lost in. Although the ones that routinely come to mind are two Play By Forum sites that I am a part of. It’s fun together with other writers and play off each other. Age of Miracles (http://miracles.exsurgent.net/index.php/main/index) is one while another is a Star Trek based site called USS Highlander (http://highlander.pegasusfleet.net/nova/index.php/login/index.) And google, oh so much google usage.