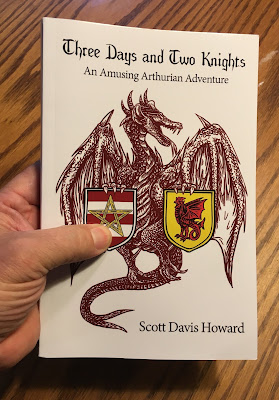 This week I read Three Days and Two Knights by Scott Davis Howard.

“Few tales tell of heroes and dragons, knights and giants, magic, miracles, love, a banshee, and the undead . . .” So begins Aelfric the Entertainer, this tale’s invasive, witty, and often philosophical narrator. Set on the moors of Scotland in the waning months of Arthur’s rule, "Three Days and Two Knights" tells how Sir Alanbart, an impoverished and spineless knight; Heather, an indomitable and irresistible serving maid; Scot, a pagan swordsman of questionable intelligence and sexuality, and Sir Gawain, the legendary romantic hero, form an unlikely alliance to free King Arthur from prison. The catch? They have just three days before the blue moon rises, at which time the red wizard Rabordath will use Arthur’s blood to conjure a dragon that will end a kingdom and set all of Britain aflame. "Three Days and Two Knights" features characters, settings, artifacts, and events drawn from medieval myth and history, and will appeal to anyone who loves the middle ages, knights, monsters, magic, or King Arthur, especially those who grew up with "The Lord of the Rings," Percy Jackson, and Cressida Cowell’s "How to Train Your Dragon" series.

I am actually on vacation. I sucked this book down while in my hammock. I took only one break for lunch. I really enjoyed this book. I rarely give 5 star ratings on Amazon because most books I read can be improved in some way. This one is just right as is. It sucked me in and the world around me faded away and I was in the story. I didn't see words on pages, I was there.

I am the perfect audience for this story.

--Well done. Highly recommended.
Posted by Marty at 4:30 AM