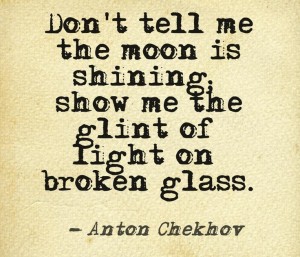 Anyone that has taken a writing class or joined a writers group has heard someone say, "Show, don't tell."

The most often quoted example is, "Don't tell me the moon is shining, show me the glint of light on broken glass."

Writers struggle with this, myself included. I have found the easiest way to avoid this issue is to simply be more specific about the scene. The glint of light on broken glass is far more specific. Leading to a better fleshed story.

The trap for beginning writers is that there are lots of different ways to "show don't tell". Some writers will pile on cliches while showing. Some things take too long to show without advancing plot or character.

Showing is different depending on your POV. I like being in a characters head. Using what the character thinks is a good tool. A narrator that speaks directly to the reader can tell as part of show. They way they tell IS part of showing.

Use the senses to show. ALL the senses. "He had coffee and a cookie." should be "He dipped his Oreo in strong, black, coffee as he breathed in the fragrant steam."

All this being said, know the rule, but then do what ever the hell you want. Be true to the voice of your writing. Lots of classic novels tell. Just do it on purpose.