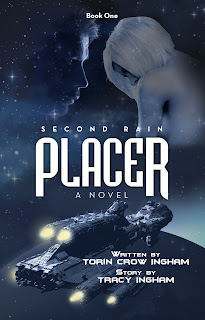 Tell me about yourselfs?

Torin: 20 year old college graduate with a degree in mechanical sciences. Torin lives in a small town in central Iowa. He has a second degree black belt in Taekwondo and multiple belts in other martial arts disciplines. He works nights and spends his days writing and playing the occasional game online. He's working toward returning to school to be a CNC/Welding/Technical instructor. He is the driving force behind bringing Placer into the light of day.

Tracy: Has been an artist of one kind or another his whole life. He put the paint brushes down in 2010 when the canvas became too small to tell the stories he wanted to tell. He has loved writing since he was young and decided that's where he will devote his creative energies.

If we were to sit down and tell the stories of our lives. Placer's world would seem far more believable. Torin survived a skull crushing high school football injury that doctors repeatedly said he shouldn't have lived through. It left him almost deaf in one ear and erased much of his memory of his early years, leaving his parents to fill in the gaps of his childhood. There are haunted houses and ghost stories, surviving cancer, being a martial arts champion and a 13 year old getting his nose broke while training with a seven time Russian Sambo champion.

At 11, Torin and his father also built their own home, from the ground up. With a small amount of help from a few family members (adding that so we don't get nasty e-mails). Boring is a word that has rarely been used to describe either Torin or his father.

Placer is the leader of a mercenary band that is looking for the woman he loves. He takes his crew and the ships that follow him across the known universe on his search for Rain. Placer is not most peoples idea of a hero. He's always truthful but never honest. His reputation is for brutality but his compassion is never far from the surface. He's a narcissist who appreciates his alcohol. He acts without remorse or apology if the ends justify the means.

Having said all that. Placer is wonderful to create stories about. He has a very strong social and moral belief. He's moral obligations only extend as far as his interests. He struggles with the same things people struggle with every day. He just deals with his problems the way we would all love to deal with things. Blow it up or kill it. There's not a lot of negotiating in Placer's world.

When Placer discovers a possible treatment for Rain, the Osterium Republic's Commandant Tige must surrender a closely guarded secret or face the wrath of Placer and the ship he commands, the Dragon; a vessel most civilizations hope never enters their solar systems.

We've had good buzz with the book. We've been told by some of our beta readers that it has an "epic saga" feel to it. One person said he put down Tom Clancy to finish Placer and was glad he did. Right now there are four books planned for the series. If all goes well, there will be other characters from the Placer universe who get their stories told too.

Why should someone buy it? Because the books are always better than the movies.

We're finishing up book #2, Placer - Third Insight. The Osterium Republic has brought the war to Placer's doorstep, his home planet.
With acts of terrorism they try to jeopardize Placer's leadership and turn the people against him. The one thing the Osterium didn't count on is how loyal the population is. There is no corruption. No crime. No poverty. Everyone is healthy, employed and educated. There's no reason to change utopia but that doesn't stop the Osterium from trying. The only question is, what kind of response will Placer have and how brutal will the outcome be? While he's dealing with all of that, he has personal matters to deal with.

Sitting behind a computer screen is hard but opening the first copy of what you wrote is harder. It never reads the same, no matter how many edits you've done and rewrites you've survived. Those white pages and black letters are a different world all together. Meanings to things change and useless words jump off the pages like they're alive. We sit back and keep thinking, "that sentence should have been written like this, not that".

Twenty years from now my son and I may not be half bad at this.

Torin: Anything dealing with military history.
Tracy: Netflix, when I'm not online doing research for the science side of the stories.