Tell me about yourself, Niel.

When I was ten years old I made a long list of things I hoped to achieve later in life. One of my main ambitions, lodged in between becoming an astronaut and drawing comics for a living, was to write a novel.

The plan was to do this before I turned thirteen, but it’s taken me a little bit longer than that. My early love of comic books eventually took me in a slightly different direction: a career in animation. I’ve worked as an animator on several feature films including Space Jam and Lost in Space, computer games like Harry Potter and the Philosopher’s Stone and Driver, and lots of TV shows.

But I continued to write until my first novel, Sorrowline, was completed . . . some decades after my thirteenth birthday. Since then I've written six more books and I'm about to launch a new sci-fi series in October with the publication of Arkship Obsidian.

I live in my native north-east England, and I still plan on becoming an astronaut one day, but it might take me a few more decades to tick that one off my list. 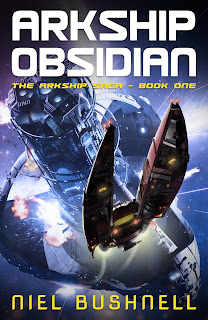 When the arkship Obsidian is attacked, Wynn must recover his memories and find out who is behind the attack, or he'll be hunted down and killed.

"Dune meets Battlestar Galactica, with a pinch of Asimov thrown in for good measure."

Earth has been destroyed, the entire solar system turned to dust by a cataclysmic event known as the Fracture. Now, the last survivors of humanity live on vast arkships drifting through the Cluster, doing what they can to survive in a hostile ever-changing environment.

When the arkship Obsidian is attacked, Wynn awakes in an escape pod fleeing from a huge space battle, unable to remember who he is. Hunted by a killer robot, the forces of a rival arkship, and the Church of the Infinite, Wynn must survive long enough to unlock his lost memories, discover who is behind the attack and take his revenge.

I'm starting book two in the Arkship Saga. It's called Arkship Vengeance and should be out in December.

I mostly write in my tiny office at home, but I love a long train journey where I can stare out the window and lose myself in the story.

Self-belief is so important, but can be elusive and fragile. It's taken me years to build up my confidence and know that I can write and finish a good story.