The Fast Friday Interviews: Bryan Nowak (a.k.a. Bryan the Writer)

Tell me about yourself, Bryan.

Born at a young age, I was destined for greatness when I learned how to be a shrewd business-baby. Pretty soon I had my own crib-based empire.

Mostly kidding or course. I was born in the south Chicago suburb of Steger, IL. A poor urban suburb, my mom worked as a nurse in a local hospital. I moved to Minnesota at the ripe old age of fourteen with my parents. It was in Minnesota where I met my wife, finished my bachelor’s degree in Geography, and my first child was born.

I also joined the US Army Reserves (34th Infantry Division, Go Red Bulls!) in Minnesota, and over a seventeen year career I spent almost four years on active duty doing a variety of interesting things.

My wife, kids and I spent three years living in Berlin, Germany where we traveled to over fourteen different countries in Europe. My personal favorite city is Venice. I could spend weeks in Venice doing nothing and it would never be enough time. A close second is the city of Prague. With its amazing food and beautiful architecture, Prague is a must see.

I have been writing seriously for the last three years and loving every minute of it. I started during a meeting where I got bored and started jotting down story ideas and just never stopped. 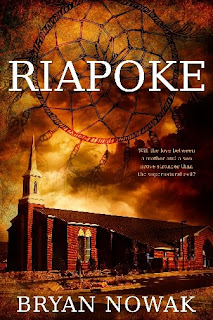 My latest novel is called, Riapoke. Riapoke is an Algonquin word meaning either the devil, or evil, depending on the translation and regional dialect you use for that translation. The book is set on fictitious Lake Oleander which has on its west side, an upscale resort and on its east side, the town of Riapoke which is known for being less than friendly to strangers.

A lucky series of events leave an opening at the resort for a single mother and her son who want to spend time together before he heads off to college. A series of unfortunate problems lead to their having to swim for their lives. Making the shore of the lake, they come up the boat ramp to find themselves in a mess of trouble in a town which really doesn’t like strangers.

When a mother and her son become stranded in a town that has institutionalized serial killing, Meghan must find a way to stop an ancient prophecy, or become the latest victims.

Meghan and Kyle head off to spend some quality mother-son time at a resort along the idyllic Lake Oleander. The picturesque and secluded escape promises a nearly perfect summer vacation. The seemingly placid lake also holds a dark secret; the bodies of those sacrificed to the local deity.
Their arrival sets the gears of an ancient prophecy in motion. They find themselves suddenly set against unimaginable forces, ancient and evil, hoping to either forestall or accelerate the prophecy’s fruition.

Deep beneath the bedrock of the town of Riapoke, an evil lay festering for hundreds of years. It waits patiently for the inevitable day it will taste freedom and claim its rightful heritage.

For about two years, I have had a manuscript I have been working on which was never quite right. It needed a complete reworking and I am approaching the point where I am happy with it. I am thrilled to introduce Crimson Tassels to my readers sometime this year. I’d like to get it out before Christmas, but I won’t rush to get it out. I’d rather have it right than on time.

I also have several story lines I am working on I am constantly getting questions about when I am going to write the second book in The Dramatic Dead series. The book is mostly outlined and I am planning to start it soon.

Home! Honestly, I hate being away from home if I don’t have to be. I like having my stuff around me, access to my tea, my extensive Xbox game collection, and the places I know and love. I take vacations when I have to, but mostly avoid it if I can.

As far as location in the house, I have a corner I took over as my writing nook. When one of my kids finally flies the nest, I intend to outfit a bedroom as a writing alcove. I have dreams of soundproof walls with every wall covered in bookshelves!

Get involved! You cannot possibly be a writer in these modern times if you don’t participate with other authors. You have to get out there and beta read, give lectures on what you know, read to audiences, offer advice, take advice, and generally get to know the authors around you. You may not think you have anything to offer, or know enough, but here is the big secret. No one truly does. And the old saying is absolutely true, a rising tide raises all boats. Collectively we can make life a better place for all of us, but we have to work together. Get in there and get involved.

Oh gosh, that would have to be boattrader.com. Honestly, I want to write full time and doing it from the deck of my own 30’ long cruiser sounds wonderful. And yes, I know the old joke about the best days of a boat owners life, so spare me. I’ve loved the water since I was a kid and I’m working toward having my own little piece of solitude. Who knows, maybe I will name the boat “Riapoke”.