The Audio edition is now available! 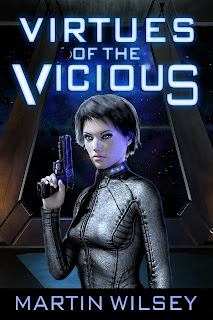 The audio edition of Virtues of the Vicious!

Elizabeth Cruze came to Earth for one reason: to buy weapons. She never counted on ending up in prison. Never fear, though, she's not planning on staying there long.

Special Investigator Neal Locke has made a career out of catching the most elusive and dangerous criminals. He's never failed to "get his man".

When Cruze escapes from prison, Locke is tasked with tracking her down. She should be easy to find...all he's got to do is follow the trail of bodies.

But Locke has been an investigator for a long time. It doesn't take him long to figure out that there's more going on than what he's been told....