Tell me about yourself, Damon?

I think it's funny when people ask about the author, but I always try to comply with the request. I used to be, in another life, an air traffic controller. That's a world of chaos, frantic efforts, and desperate solutions at times. When I retired from that, I wanted something “easier”. I thought, “Hell, I’m scientifically literate, well spoken, how about author?”

I had no idea what I was getting myself into. Conferences, classes, university courses... and that was just to get my writing up to par. On top of that there is a rather brutal on the job education for marketing, public relations, graphic design, networking, etc. I’ll be honest, I’m still learning.

I just completed my 6th novel, the 5th book in my space opera series, Dark Seas. I’m proud to say I followed rule #1 of being an author, which is write what you love. I love good sci-fi, space opera, and I love the characters I’ve created. I’m the father of three stunningly beautiful and intelligent daughters, so it was a no brainer for me that many of my main characters would be women. It’s even sort of the rule in my house, my wife is a hospital administrator, so she brings home the bacon now that I’m retired from ATC, and I write books. I also am a far better cook than she is, so I make her great dinners.

Honestly, I’m just some guy who loves science, technology, gadgets, and playing video games. I also happen to tell stories with complex and in-depth topics, which people seem to like. That makes me happy, because it’s the closest I’ve come to being the popular kid.

Last year I had a short story published in the American Mensa Annual Fiction Issue, which was amazing. The editor of the magazine wrote me after I submitted, telling me how much he loved the idea. As someone who normally is an indie author, that was a taste of validation. Thanks to that experience, I dove into my novels with renewed vigor. I really think indie publishing is the way to go, but it was nice to have proof that my writing was up to snuff for the traditional system.

I plan on being an author until I die, sort of like I’m a father, a husband... it’s just part of the fabric of Damon Alan. 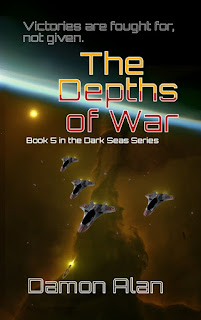 The first four books of the Dark Seas Series were about Sarah Dayson developing to become the woman who could save our species. In book 5, that process begins. For two centuries humanity has been fighting a losing battle against the Hive, an alien nanite based intelligence that inhabits and coopts human bodies for their own purposes. In the first four books she masters the skills of a star fleet commander. She learns that in war there are often terrible prices to pay, and sometimes it’s the innocent that pay. She’s learned that evil isn’t always just a monster you can shoot, sometimes it’s within the people you love the most.

In book 5 Sarah has befriended the unpredictable and powerful adepts of Nula Armana. They are the next evolutionary step of humanity, but as dangerous as they are they’re a fine alternative the Hive. With adept allies in tow, she begins the process of rebuilding her shattered fleet to fighting status. What she doesn’t count on is the ability of humanity to stand in our own way. In order to fight the Hive, she must first subdue the opportunistic evil of humanity itself and either convince the Komi Syndicate to work with her or take what she needs from them by force.
But for the first time Sarah has a plan to not only to save humanity, but to destroy our enemy. With the nexus of adept power by her side, she begins her campaign to save us all.

I tend to work on novels more than one at a time, so that as ideas arise they make their way to the book and are not forgotten. I’m working on book 6 in the Dark Seas series, and The Fall of Liberty, a sequel to a thriller I have on Amazon now called Serum. In Serum a pharmacology professor invents a cure for cancer and a mad few in our government try to kill him for it to protect their financial interests. In the sequel most of the heroes from book 1 are living in Israel and the USA goes after them in a big way.

The only place I can seem to write is my office, my computer, my keyboard. I often get ideas in random places, but I text them to myself so I don’t forget them and wait until I get home. My office is a mess, my computer is starting to show wear from all the keystrokes... but it’s mine. And I love it.

That nothing is as simple as it seems. When I decided to write books, I thought I’d just sit down, hammer them out, and suddenly I’d be chauffeured around in a limousine. That, needless to say, is not how it works. The process of learning to write a book was several times harder than I expected, and the process of getting that book in the hands of readers is even harder. So now, as I prepare to release book 5, I’m already thinking of how I want to do it. It has to be in a way that puts the opportunity to buy it in front of the most people.

Wikipedia. I actually donate to them, because I use the site so much. It’s the default go-to when researching, whether for sci-fi or a thriller. While not a scholarly source, I have found Wikipedia to be a lot more accurate than the evening news, and we listen to those people. Plus if Wikipedia doesn’t have it, there probably is a wiki out there for the topic you want to research. Just go get it.