Now Available: Virtues of the Vicious 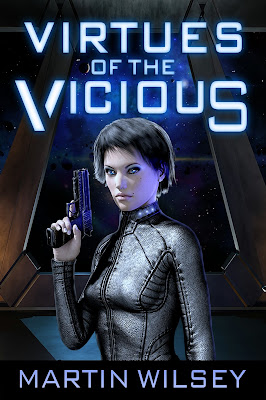 I am pleased to announce the release of: Virtues of the Vicious

This book is a stand alone novel that takes place in the Solstice universe in the year 2636.

Here is the description from the back cover:

“It has been difficult to determine when the first shots were fired in the AI Wars. Some historians argue that the opening salvos were subtle economic assassinations to ensure monopolies continued. This historian believes it began at midnight on September 21, 2636. That shot was fired by Elizabeth Cruze.”

--Blue Peridot, The Turning Point: History of the AI Wars.

Elizabeth Cruze came to Earth for one reason: to buy weapons. She never counted on ending up in prison. Never fear, though, she’s not planning on staying there long.

Special Investigator Neal Locke has made a career out of catching the most elusive and dangerous criminals. He’s never failed to “get his man.”

When Cruze escapes from prison, Locke is tasked with racking her down. She should be easy to find…all he’s got to do is follow the trail of bodies.

But Lock has been an investigator for a long time. It doesn’t take him long to figure out that there’s more going on than what he’s been told…

Virtues of the Vicious is currently available in Kindle and Dead Tree editions! Audible is coming soon!

--Signed copies are available for $15 if you email me at info@tannhauserpress.com!