I write because I cannot imagine not writing.
I write to challenge readers’ fixed ideas in a way that will make them consider other possibilities, particularly about sentience, free will, and life after death.

And much of what I write is about things that are not what they seem, but might be. Psionics, multi-sensory human beings, telepathy, telekinesis, precognition, clairsentience, energy medicine, awareness and ongoing communication between the living and the dead as a fact of daily life, and how that might affect life and philosophy of a world.

I began writing poetry in grammar school. By the time I left college, I managed to see two poems published. Clearly, this was not an easy way to make a living. I did manage to support myself by working as a Technical Editor on the Apollo Project, and then, as a Research Assistant at NYU Medical Center’s Institute of Rehabilitation Medicine.

That led me back into school, graduate school, and into a series of cross-country, cross-border, overseas, and third world expatriate work and living adventures in Canada, England, West Africa, four states and two regions in the U.S.

I learned how much of what we assume is reality, and “the way things are,” is very different from what others assume. After all this travelling and living in foreign cultures, particularly the third world, I find science fiction is a natural place for me to write, since its boundaries of imagination are limitless. A recurrent theme in my writing is “It ain’t necessarily so.” This may be the part where I say I have one piece of paper that says I’m a psychologist, and another that says I’m a medium. I talk with dead people all the time. So writing about worlds where they participate is not so difficult for me. 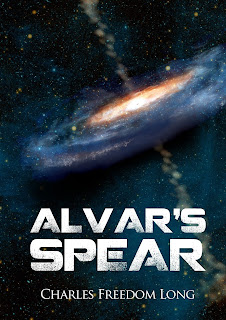 When the sentient moon-world, Alvar, tells Gar she is about to commit suicide by hurling herself into the gas giant she orbits, because a mutant conspiracy is about to turn her (the planet)into a fetid swamp and enslave her people, the Antal hive, Gar—a hybrid—must become Alvar’s Spear, the planetary savior. To make this meta-change, He must go off into the vild, where the feared Snow Wolves rule, and to the Forbidden Mountains from which no one has ever returned. If successful, he will save Alvar.

With only a small faction of Antal behind him, Gar must confront assassins, a traitor, the ruthless and power-hungry Noksun, who sees him as his only real obstruction to ruling the world. Gar enlists the help of the most brilliant geneticist in two galaxies, Mbali, a beautiful Terran who seems to oppose him at every turn.

But sentience may be more widespread than we think, the worlds of the living and the dead may interweave more than we know. Gar finds help in the absolute most unexpected quarter—but will it be enough to overcome Noksun’s organized military might?

What will Gar choose to do? The danger of creating a savior is he will be his own man. He will do what he will, and whether his acts are judged good or bad are of little consequence to him. Time is running out. What time reveals may not be to everyone’s liking.

I’m working on the prequel to the Seven Worlds Series. Where the characters in Dancing With The Dead and Alvar’s Spear have their origins, And the tales have their beginnings.

I have a red armchair in a room full of books, where I sit with a laptop pc, my three Maltese dogs, lots of coffee, and invite my friends from the other side of the veil called death to work with me as I write.

Hemingway’s statement: “There’s nothing to writing. You just sit down at a typewriter and bleed.” If you can’t say what you really mean, if you can’t tell the truth as you see it, even while you’re writing fiction that you hope will entertain your readers, then you’re bleeding for no damn good reason.

Probably NASA Images. I get ideas of where I might place a solar system, what kind of beings might live there, what they might think and feel and do from letting the images penetrate my inner consciousness.