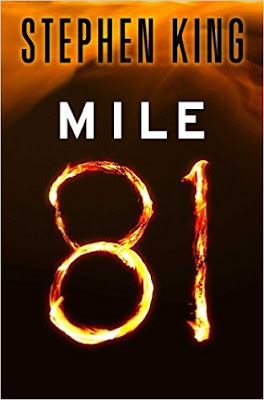 This week I read Mile 81 by Stephen King.

This was a fun short story in classic King fashion. Here is the description from Amazon:

With the heart of Stand By Me and the genius horror of Christine, Mile 81 is Stephen King unleashing his imagination as he drives past one of those road signs...

At Mile 81 on the Maine Turnpike is a boarded up rest stop on a highway in Maine. It's a place where high school kids drink and get into the kind of trouble high school kids have always gotten into. It's the place where Pete Simmons goes when his older brother, who's supposed to be looking out for him, heads off to the gravel pit to play "paratroopers over the side." Pete, armed only with the magnifying glass he got for his tenth birthday, finds a discarded bottle of vodka in the boarded up burger shack and drinks enough to pass out.

Not much later, a mud-covered station wagon (which is strange because there hadn't been any rain in New England for over a week) veers into the Mile 81 rest area, ignoring the sign that says "closed, no services." The driver's door opens but nobody gets out.

Doug Clayton, an insurance man from Bangor, is driving his Prius to a conference in Portland. On the backseat are his briefcase and suitcase and in the passenger bucket is a King James Bible, what Doug calls "the ultimate insurance manual," but it isn't going to save Doug when he decides to be the Good Samaritan and help the guy in the broken down wagon. He pulls up behind it, puts on his four-ways, and then notices that the wagon has no plates.

Ten minutes later, Julianne Vernon, pulling a horse trailer, spots the Prius and the wagon, and pulls over. Julianne finds Doug Clayton's cracked cell phone near the wagon door — and gets too close herself. By the time Pete Simmons wakes up from his vodka nap, there are a half a dozen cars at the Mile 81 rest stop. Two kids — Rachel and Blake Lussier — and one horse named Deedee are the only living left. Unless you maybe count the wagon.

--I really enjoyed this. Plus the bonus short DUNE was great as well.

Email ThisBlogThis!Share to TwitterShare to FacebookShare to Pinterest
Labels: Promo