Tell me about yourself, Chad?

I am a 37-year-old self-published author from Rhode Island who has published five science fiction books for the Amazon Kindle.  I write science fiction with really “out there” premises, but that have relatable characters.  My goal is to make the weird and absurd relatable, because that is the way that I see the world day-to-day.  This format allows me to comment humorously on things I see around me.  I love science fiction movies, comic books and animation.  I work for UPS.  I have Aspergers and I am married.

When a paparazzo uncovers an alien invasion plot, he must team up with his estranged girlfriend to stop the aliens that abducted him when he was six. 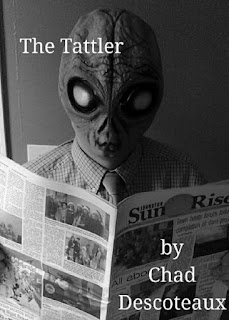 Barry Young was abducted by aliens when he was six, an experience he does not remember. He can only piece together what happened that night by what his best friend Scott (who was also abducted) tells him.  Barry is also a paparazzo. He is the best in his business, using elaborate costumes to get high-paying celebrity pics. One night, Barry uncovers evidence of an alien invasion that his ex-girlfriend, new reporter Nikki Graves, has also been assigned to cover. Together, these two estranged exes are hot on the trail of an alien invasion plot twenty Earth years in the making. Will they stop the invasion? Will being thrown together in this assignment help them understand each other in way they couldn't before? And what about conspiracy theorist Eddie Schultz, who has been on the trail of these aliens the entire time, publishing his findings in a tabloid "rag" called....THE TATTLER???

My office, which is filled with posters of things that imspire me.