I was born in northern Iceland in 1982, and spent a portion of my early youth in Norway before moving back home. I was diagnosed with Asperger’s Syndrome in the late 90’s, explaining a lot about my personality: I’m just enough of a shut-in weirdo to write books. :-) Not really knowing what to do with my life after graduating high school in 2004, I finally began trying to write in earnest. Teaching myself the craft was a long, slow process, but I got my first novel relased in Iceland seven years later. I ended up publishing four more in my native country, before moving to translating my work in 2015, and publishing on Amazon. This year I’m finally writing brand-new material in English, and I’m heading to college in the fall. So things are getting interesting, on my end of things. 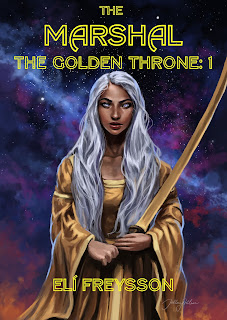 Fill in the blanks: When the king of the Realm of the Glorious Dawn is assassinated, a military man must escape the capital planet with the young heir, or the ancient Realm will be lost to a murderous usurper.
The interstellar Realm of the Glorious Dawn has endured for eight centuries, providing stability and law in the wake of the Long Darkness. Now the assassination of king Tunus has plunged the Realm into civil war. From the heart of the Realm to its borders and beyond, people of every strata are swept up in the greatest tempest in lifetimes.
The Marshal:
The head of the Royal Military witnesses the death of his king. Defying the initial shock, Marshal Beren realizes the future of the Realm suddenly depends on his immediate reaction. Vary of further assassinations, he initiates a desperate flight from the Realm’s capital planet with the sole heir in tow, hoping to salvage what he can.
Please attach a Cover photo.

I am working on The Golden Throne. It is something of an experiment in storytelling. It’s an epic space opera, telling the story of a nine-year long space war of succession, through eleven different shorts, each about a different character having an adventure in a different part of the galaxy. The ongoing war and certain recurring characters form an ongoing metaplot. I have started releasing entries, but I’ve quite fallen in love with the setting and am already almost done lining up the sequel.

I find that I do my best writing down at my local café, with a nice cup of tea and a notepad. Getting out of the house does wonders for my brain.

Deviantart can be a lot of fun, but about the only site I actually socialize on is fantasyfaction.com. It’s a great little community.