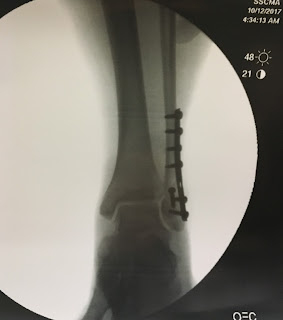 Every now and the something happens. I call this kind of thing The Monkey Wrench.

Last week my wife broke her leg. She was walking down the stairs carrying a laundry basket and stepped on a pile of magazines (she had left there). She only fell three steps but she badly broke her fibula and dislocated her ankle.

The good new was that the EMTs were there in only three minutes after I dialed 911. The bad news was it was broke bad. Surgery was required. Recovery will be slower than a simple break.

This happened on October 1st, our wedding anniversary. Today is October 17th. This may be my longest hiatus from writing since 2014.

So what have I learned?

As far as Monkey Wrenches go, this is a minor one (Sorry, Brenda.)  Remember that time when Steven King was out for a walk and got hit by a guy in a van? Now that is a MAJOR Monkey Wrench. I just have to do all the cooking, shopping, cleaning, laundry, home maintenance stuff and caring for my poor, pitiful, frustrated wife. It takes more time than you think! It sure make me appreciate all she does for me.

Be prepared against Monkey Wrenches:

--REMEMBER: Never leave a stack of magazines on the stairs to take up later...