Tell me about yourself, Tabitha?

Hi! I’m Tabitha, but I guess you figured that out already. I love coffee and tacos and tv. I really love tv. I have a husband and two daughters, both of which are super sassy like their mom. I spend most of my time binge-watching or talking about Jesus.(I’m also a pastor which is the Jesus part and I covered the tv obsession already.) Weird fact, I took fencing classes in college and I don’t run. I can run, but I don’t. If you see me running, you should run too because a wild animal or hoard of zombies are chasing me.

When she finds out demons are real and she is one of the few humans who can see then, Zoe Andrews must join her Aunt Claire and the other chosen to stop the Destroyer from gathering the darkness, or else the apocalypse begins and we all become demon food. 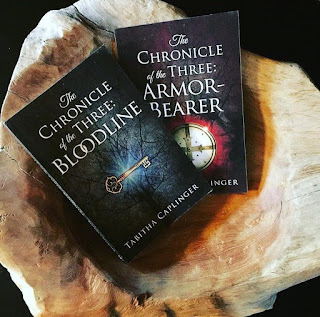 Zoe thought the loss of her parents would be the most difficult thing she'd ever have to endure. When she began seeing things she couldn't explain in her new home of Torchcreek, Virginia, she was sure the grief was driving her mad. Instead Zoe discovers she is part of an ancient bloodline, one destined to prevent the powers of darkness from condemning the world. But Zoe, the daughter of the three, isn't just another descendant-she's the key to humanity's salvation. In this first installment of the supernatural fantasy trilogy The Chronicle of the Three, Zoe Andrews learns that not all shadows are harmless interceptions of light. Some are a more sinister darkness that wants to torment the soul.

Darkness creeps around every corner as demons gather in the small town of Torch Creek, Virginia. The Destroyer has arrived, and the Reaping is coming closer by the day. Zoe knows it’s her duty as the Daughter of the Three to hold back the shadows, but she doesn't know how—and time is running out. Zoe and her friends turn to the ancient text of The Chronicle for help. Are they strong enough to withstand an enemy who exploits their deepest fears and doubts? Will they find the answers they're looking for before all of Hell is unleashed? Zoe’s journey as the prophecy’s promised Daughter continues in this second installment of the fantasy trilogy, The Chronicle of the Three.

Final edits are about to begin on the third installment of this spunky little TCO3 Trilogy. But in the meantime I just started a new project which I think will be sci-fi/dystopian. I think. There are aliens and a group of outcasts, who might turn rebellious, who live in the mountains. Someone died already and I’m trying to work in a pet falcon. That’s really all I got so far.

I usually write at home, curled up in my comfy chair with a hot cup of coffee. I like to be alone when I write. I would get too easily distracted outside or at a coffee shop.

Book Marketing sucks. I know it is a necessary evil but I hate it. That’s not really a favorite lesson but it’s been a valuable one. I wish I had known the marketing part of things before I started writing so I could have been more ahead of the game there. I think knowing some of what I know now, back then would have saved me a little frustration at least.