Tell me about yourself, Lou.

I’m the last of the pulp writers in science fiction and fantasy. I write fast, furious and completely by the seat of my pants.

I like to think of myself as a talented amateur, meaning this isn’t my full-time job. I’ve worked as a journalist all my life, and I would never leave it. It’s unusual that both my job and my hobby both involve typing – which I do with only two fingers. It’s tough on the hands.

Since I write for my personal enjoyment, I’m very self-indulgent as to subjects, which probably hurts my sales. On the other hand, I don’t care about the money and I’ve had some of my best stories published by non-paying venues. But with sales to outfits such as Asimov’s and Daily Science Fiction, I have my professional credentials, also. 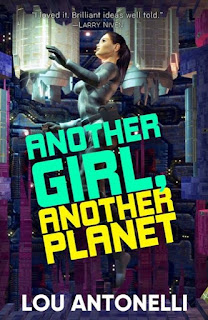 “Another Girl, Another Planet” is a retro-futurist alternate history. It’s set in 1985, but a 1985 very different from the one we knew. Both Robert Heinlein and Isaac Asimov did not become full-time s-f writers; Heinlein was able to return to the Navy and shortly after World War II turned the Arms Race into a Space Race instead. Asimov instead developed genuine robotics.

As a result, we have extensive colonies on the Moon and Mars, and they’re lousy with robots and androids.
It’s in that setting we find ourselves in the thick of a murder mystery.

When everyone else panics a hero must keep calm and solve the problem or else mitigate it as much as possible.

Promoting “Another Girl, Another Planet” and writing the occasional short story while working on ideas for a sequel.

I use a desktop computer, so at my desk.

Writing is like politics – most of the time you lose, most people lose most of the time, the goal is seldom worth the effort, but occasionally you get something right, and then it’s practically magic.