Published by The History Press in 2013 with the memoir In Sights, I have since written two novels, Delphian and WTF. I have self-published both novels, the reason being, my agent asked me to cut 60,000 words from Delphian before he read it, because, he said, 170,000 wouldn't be considered by traditional publisher by a debut novelist. Okay, so now I'm a debut novelist rather than a published author... I, of course, refused to cut 60,000 words as it would, in my opinion, ruin the book. The reason was explained to me as the price point. Anything over 250 pages and the costs escalate and the price point for a thriller paperback is £7.99.  I immediately set about writing a novel that would come in at 250 pages and this WTF was born. By this time I have researched and learned a lot about indie publishing and am liking what I see and experience, so self-publish WTF as well.

Prior to all this, my background is the military where I saw action in the Falklands war and then I moved into BBC drama where The Play For Today, Mimosa Boys, was written from my diary and letters of the war. After Mimosa Boys I worked on six plays for BBC Belfast and returned to Wales to work on many more dramas. I left the BBC to focus on my own material. After a series of short stories, I wrote a novel about a black president coming to power and what the Klu Klux Klan were doing to prevent it. The novel was extremely well received by junior editors in major publishing houses such as HarperCollins and it was also being considered by a major Hollywood film producer, but the outcome was the novel wasn't published because the senior people pulled the plug due to a fear of riots on the streets...

I have written numerous short stories, one of which has been produced for BBC TV. Both my current novels have been scripted and are currently in front of producers. Film and TV is my primary target. Writing the novel is my way of cementing my interpretation of the story I want to tell... 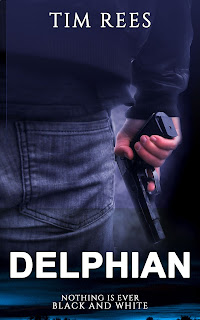 Tell me about your current Book.

I would like to tell you a secret, but can you handle the truth?

The British intelligence community now has a problem. A secret agent who specialised in cover-up operations is now hell bent on disclosing top secret medical research funded by the British government. He is now a rogue agent whose conscience has been compromised. Now he's a law unto himself. He is an assassin with a conscience. The clock is ticking as he’s pursued by the British secret service and he’s determined to save as many innocent lives as possible.

People believe money is power, but he understands it is with information where real power lies.

There's no such thing as good and evil, there's just people.

A sequel to Delphian.

It doesn't matter so long as I am not interrupted.

Facebook. It has reconnected me with so many valued friends and ex lovers.