Seon Stronghold is, at the moment, a 2nd degree black belt in Shotokan Karate with sixteen years of drafting experience in Architecture and Structural Engineering under his worn out but beloved 20 dollar belt. A lover of almost all things Art, he enjoys Reading, Writing, Hitting the gym, Training at the dojo, Hiking, Swimming, Gaming, Skyrim...which he considers to be more than just gaming...and gambling (Gin and Poker) for candies with his wife. He lives in St. Vincent and the Grenadines...for now.

When an Earthfront Base on Venus is attacked, a group of soldiers; the Iron Five must find the culprits, or else Earth and everything they know, will fall.

To give a traditional description of my book would be the acceptable thing to do, however, I tend to do things my way every-so-often and so, in light of my excitement to share my world with you...here is what I know. According to history, mankind came across Sol-technology in the year 2035 AD. A scientist by the name of Doctor Lorenz Olivius created the first ever successful, miniature replica of the sun. The applications were, as one can imagine, limitless. Within fifteen years of its dawn, the Sol Combustion engine had allowed mankind to go beyond their limitations and finally reach for the stars. This breakthrough had then led to one hundred years of galactic searching and mapping and development. Then in 2150 AD, our ancestors left Earth in massive Starship fleets for new homes and in doing so, a new era was born; the era of, The Exodus. 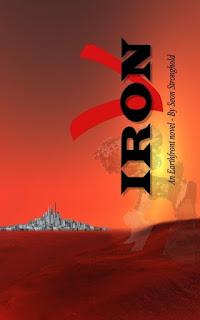 Now as far as I remember, Kedenians were among the first to leave for the stars. Originally, settling on Nema; a Goldilocks planet in a system five light years from Earth. But after fifty years of disputes now known as The Splinter Wars, Earthfront expelled the rogue clan, known then as, Keden Industries. Their leader, Amir Kedeni and his supporters were banished and forced to search for a non-hostile world in unknown space and it wasn’t long before they stumbled across a rich, desert planet now named Keden.

Shortly after...a few decades to be precise...mankind colonized many systems in the Milky Way and large Corporations, Governments and various organizations rose to govern it all. Earthfront, the leading authority in most of our Galactic Domain, is the largest governing body in existence but even as peace reigns throughout known space, Keden, it seems, would forever be a hostile world toward them.

And so here we are. The year is now 878TE and eight thousand Light-years from Earth, on the arid Planet Keden, is a wealth of untapped resources and power. But one man, with a twisted vision, sets in motion a plan that can change the fate of the Galaxy forever and caught in the crossfire, our heroes of Iron Five, Captain Richard Gant and his crew, must overcome the challenges of Love, Grief and Betrayal, and strap themselves into the cockpits of Next Generation war machines as they are thrown headlong into the heart of a conflict, the likes of which has never been recorded.

I am currently working on the second book in the Iron Five saga.