Tell me about yourself, Ryan.

I am a biologist who spends time out on the Bering Sea working with all sorts of fascinating creatures.  Seriously.  I collect, maintain, and distribute data for scientific, management, and regulation compliance purposes in the Gulf of Alaska and the Eastern Bering Sea/Aleutian Islands.  When I’m not tangling with squid and wrestling with sharks, I enjoy watching and playing sports of all kinds, playing guitar, and of course, writing, which I hope to make more than a hobby instead of "that thing I tried one time."

When a horrific car accident mysteriously leads to powers of mindreading and telepathy, thereby thrusting him into the world of Supernaturals, Ethan must put a stop to a tyrannical leader’s treacherous  schemes, or else it may cost him and his newfound companions their lives—if his ever increasing lack of control doesn’t do the job first. 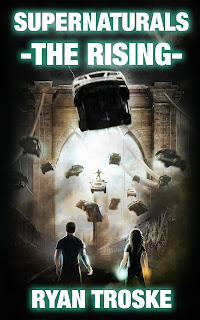 To many, the idea of super powers is illogical; an absurdity reserved for the likes of Hollywood and overactive imaginations.

Ethan is just an ordinary teenage boy--infatuated with sports, music and, of course, girls.  That is, until a horrific car accident changes his life in ways he could never have imagined.

Waking in the hospital, Ethan discovers he now has the ability to read others' thoughts, and even more perplexing, move objects with his mind.

And he's not the only one.

Seeking guidance and control, Ethan finds himself immersed in a world of individuals with their own unique special abilities--A world ofSupernaturals.

Full summary: Ethan is just an ordinary teenage boy--infatuated with sports music and, of course, girls. Or so he thinks. Heading home on a rainy night from an amateur guitar gig, he finds his life turned completely upside down--literally. His car spins and flips out of control after what he believes to be a small animal jumps out in front of him. The horrific accident is only the beginning of a series of mysterious and seemingly unrelated events that will change his life forever.

After awaking in the hospital, and following an encounter with an enigmatic doctor, Ethan discovers that something that occurred during the wreck allows him to hear others' thoughts, and even more perplexing, move objects with his mind. While trying to wrap his head around this mystery, he realizes he's not alone. There are others out there with special powers. Not long after learning of this new world, Ethan's ever increasing lack of control places those around him at serious risk. In order to protect those he loves, he makes the difficult decision to leave and accepts an offer to attend specialized training along with other so called Supernaturals to gain command over his newfound gifts. Shortly after beginning his schooling, Ethan is sent on a mission to kidnap who he believes to be the enemy leader in a well concealed Supernaturals war. But the further he becomes embedded in this new world, the more he discovers things are not quite what they seem and doesn't know who can be trusted.

In this first installment of the Supernaturals series, Ethan discovers that super powers aren't always so super, and is faced with difficult decisions that will not only affect his own life, but which may determine the life or death of his newfound companions and mentor.

I am currently working to finish up The Recruit (Supernaturals Book 2), as well as the first books in a couple other series I hope to complete: The Outbreak (Survival Book 1), a dystopian/post-apocalyptic journey; and The Lost Book of Behlkrumor (The Telkuhryn Chronicles book 1), an epic fantasy adventure.

I love to sit outside and write.  Whether it’s enjoying a beautiful day at the park or relaxing at home in my own backyard.

Besides social media, the only site I visit on a regular basis is ESPN.  I’m a huge sports fan and love reading up on pretty much anything having to do with baseball, hockey, and football.