Tell me about yourself, Mehreen?

I have been publishing since 1987. My writing career began with journalism and academic reviews and articles. My journalistic articles appeared in The Sheaf, a campus newspaper for the University of Saskatchewan Canada between 1987-1999. Later on, she published fiction, mostly introspective.

My reviews and articles have appeared in notable, peer-reviewed journals in my area of study. For example, the research article: A Note on Phrase Structure Analysis and Design Implication for ICALL, was first published in Computer Assisted Language Learning, Special Issue, Intelligent Call Systems, Lisse, Netherlands Vol 15 Issue 4, 2002.

Set in Brisbane Queensland, Jacaranda Blues is my debut novella, written in a stream of consciousness style. Following, I published The Blotted Line, a collection of short stories. More recently, Snapshots and Moirae were first published by PostScript Editions, UK in 2010 and a second edition by Cosmic Teapot Publishing, Canada in 2016.

One of my short stories, “The Anomalous Duo” has been accepted to be translated in the German language for publication in the anthology, Familie (er)zählt.  So far, I have co-authored quite a number books and her shorter works that have been included in various anthologies published by PnP Publishers. Our Treasured Stories and Poems, and Write to Remember are two of them.

Her books have made their ways into COPAC, WORLDCAT, TROVE sites through the gateways of Cambridge university library, Bodleian and fryer Library at the university of Queensland, Australia. Jacaranda Blues and Moirae have been heritage listed by the State Library of Victoria, Australia. Gutenberg Project has allowed Moirae to be self-published on their site.

I come from a family of writers. Many of my relatives are published writers of fiction and nonfiction including my father Manzoor Alam. My grandfather Jan-e- Alam Chowdhury was a novelist. 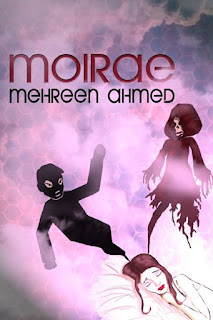 My current book is called Moirae.  In Moirae, Nalia finds herself trapped in a strange and inescapable lucid dream. Danger looms ahead for her friends. Pressured out of their homes in the Lost Winds, every step threatens them with persecution and death.

Taking a daring route on a treacherous sea, they seek asylum in a new land. Will they make it to their destination? Will Nalia’s dream of finding peace in Draviland become the utopia that she desperately desires, or are the dangers of this new land even worse than her home?

Set in a real time, stream-of-consciousness narrative, this story takes you on a sweeping literary journey.

An historical fiction, The Pacifist.
In this story, Peter Baxter leave an orphanage as soon as he turns sixteen. The tyranny of the orphanage does not break him but rather makes him, as he enthusiastically embraces life and reinvents himself. He meets Farmer Brown the first day he steps out of the orphanage. Farmer Brown offers the homeless a room on his farm in exchange for free work. Peter is only too pleased to move in, but tries to return this favor anyway he can. However, he soon realizes that life here is not that simple after all, as Farmer Brown has a complex past. Peter is given to read a red folder one day, which details the farmer’s rather curly history.

A new story emerges from this point on and transpires gradually towards a stunning end, as the red folder keeps getting fatter with newer entries. It serves not only as a document of the farmer’s account, but Peter’s as well. A full on evolution of ruthless ambition fueled by profound love and unmitigated sufferings, where the orphanage, by far, not only plays a huge role in shaping the destiny of the characters, but becomes a metaphor of institutional power as well.

My favorite place is my writing desk by the window through which I can see dark clouds.

I love the Absolute Shakespeare website.  It’s essential for any Shakespeare lover!
http://absoluteshakespeare.com