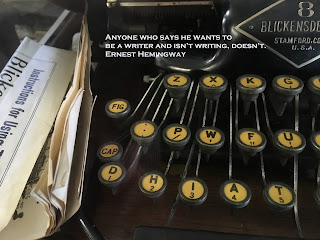 Books are mirrors: you only see in them what you already have inside you.
—Carlos Ruiz Zafn

It is by siting down to write every morning that one becomes a writer.
—Gerald Brenan

Have something to say and say it as clearly as you can. That is the only secret of style.
—Matthew Arnold

I love writing. I love the swirl and swing of words as they tangle with human emotions.
—James Michener

There’s no such thing as writer’s block. That was invented by people in California who couldn’t write.
—T. Pratchett

It is impossible to discourage real writers—they don't give a damn what you say, they're going to write.
—S. Lewis

Drama is life with the dull bits cut out.
—Alfred Hitchcock

In utter loneliness a writer tries to explain the inexplicable.
—John Steinbeck

Anyone who says he wants to be a writer and isn’t writing, doesn’t.
—Ernest Hemingway