Tell me about yourself, JB.

I’m a lifelong resident of beautiful Manchester, New Hampshire, where I reside with my husband Daniel and son Matthew, along with the two best dogs in the entire world – our West Highland Terrier, Monty, and our newly adopted shelter dog, Ayden.

I’m proud to say that I put myself through a four-year college program while working a full-time job—first, as a Bill Collector at a retail credit corporation, then as an employee at a local bank - graduating with High Honors from Notre Dame College in Manchester, New Hampshire. I currently hold a Bachelor of Arts degree in Psychology and History with several completed graduate courses in Counseling and Human Behavior. Due to financial reasons, I decided to forego further schooling and keep my job at the bank. After only a few years, I had moved up the corporate ladder to become Customer Relations Manager, but in 1993, the historic FDIC takeover of the “Big Five” NH banks took place and I feared I would be put out of work. Luckily, I had 15 years of experience in banking and I earned a position as a Corporate Trainer under the new merger, but I only continued to work for the new bank for a short time thereafter.

While looking for a newer, more satisfying job, I found that staying at home with my son gave me more time to explore my artistic talents. In the 2 years I was at home providing childhood daycare for 5 other children, I completed an art portfolio of about 250 pen & ink drawings that were due to go on display at a local gallery! Unfortunately, several big-budget hits on the house we owned forced me to take on a part-time job at a doctor’s office to help make ends meet. Two years later, I was involved in a work accident that resulted in a severe spinal injury and I suffered two mishandled spinal fusions that left me permanently disabled.

After the botched surgeries, it took me awhile to find my voice again. During that time, I was diagnosed with Myasthenia Gravas, a neurological disorder that causes the protective coating on the nerves to disintegrate. I had trouble with chronic pain, and due to the resulting coordination issues with my disease, drawing became impossible. Desperate to find my voice again, I started reading, journaling, and even penning a few poems and short-stories. Little did I realize that this devastating set-back was the beginning of a whole new career for me as an Indie Author!

I’ve always been interested with the intimate relationship between Jesus and Mary Magdalene. After amassing 20 years worth of historical, religious, and cultural research, I wanted to reintroduce a younger, more vibrant Jesus and Mary through a novel series. It was then that I discovered a way to present their unique bond in a way no one else before me has, with “Miriamne the Magdala – The First Chapter in the Yeshua and Miri Novel Series”!


Tell me about your current book: 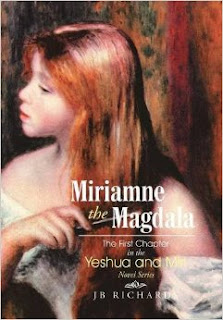 When young Yeshua reveals His true identity and makes known His fateful Mission on this earth, an astonished Miriamne must then decide whether to continue her courtship with Him or risk losing Him forever!

From the time of his family’s return from Egypt to Nazareth, young Yeshua has grown up shunned and reviled by the townsfolk of his step-father Joseph’s home village. Questions surrounding the authenticity of his parentage along with the strange and unpredictable supernatural powers that seem to control Yeshua have the people of the tiny backwater town suspicious and frightened.

When Yeshua’s mother, Mary, sends a letter to her dearest cousin pleading for help for her gravely ill husband, Miriamne’s mother, Salome, instantly responds. Soon, Salome and her husband, Micah—along with their three children: Martha, Miriamne, and Lazarus—set out for Nazareth on a mission of mercy. During the family’s stay, an old but avid argument causes major upset, especially for young Yeshua who loses control of His staggering powers. As a result of the calamity, the angry townsfolk pounce on the opportunity to band together with their rabbi and the Elder’s Council to banish Yeshua from Nazareth—forever.

Once Yeshua is forced to relocate from his family’s home to his cousin’s huge country estate near Sepphoris, the budding friendship between him and Miriamne flourishes. But just when things seem so hopeful, a sudden turn of events causes Yeshua to choose between taking His own action to avoid a terrible tragedy and His obligation to obey His Heavenly Father’s wishes.

When an astonished Miriamne learns of Yeshua’s true identity and His Mission on this earth, she must then decide whether to continue her relationship with Him or risk losing Him to His Fate. The pressure reaches a breaking point when Miriamne’s wealthy uncle, Joseph bar Abram, and his Caravaneers arrive for a family visit. Miriamne is devastated when Yeshua is presented with a rare opportunity that will take Him far, far away from her . . . quite possibly forever. It is then that Yeshua must make a life-altering decision—whether to follow His heart or fulfill His Destiny.

"Miriamne the Magdala” is a compelling and provocative story--one I guarantee you will never forget! This introductory novel to The Yeshua and Miri Novel Series—the greatest love story never told—masterfully recreates the early, so-called "missing years" of Jesus, expanding on his intimate relationship with the girl who would become his closest confidante, Apostle to the Apostles, and one true love! The result is a breathtaking, epic tale of how a youth, destined to be “King of Kings”, finds His Destiny when He falls in love with the young girl who forever captures His heart!

Currently, I'm working on the next novel in The Yeshua and Miri Novel Series, “Yeshua the Christ: The Silk Road”, in which Yeshua and Miriamne leave their family home in Galilee to join their uncle, Joseph bar Abram, and his Caravaneers on the road to the Far East.

The wonders of Syria, Persia, the Sind, and the Indus fascinate and delight the young couple who, as guests of their sponsor, Prince Ravanna of Orissa, are shown the grandeur of Persia and the Indus as they are treated to the luxuries of palace life. As a sponsored scholar, Yeshua discovers a whole new system of beliefs among Persia’s Magi and the Brahmana of the Indus. At the Temple at Jagganath, the priests are highly impressed with their young protege and they entrust him with their most sacred and secret teachings granted only to the privileged few. Yeshua, however, believes no one, including the lower castes, should be excluded from these important teachings, and he challenges his teachers, insisting that just like the Torah these sacred writings were meant to be shared with all the people of the world.

When Yeshua decides to leave the Temple after a heated argument with his mentors and sets out on his own, the brash young preacher brings down the wrath of the Chief Lama who immediately censors him and orders him to cease his public teaching. But Yeshua has a will of His own. When he continues to preach the doctrine to the Sudras of the lower caste, and refuses to bow down to the Lama even upon penalty of death, an assassination plot is hatched by the Brahmana, placing his life, and the lives of his family and friends, in mortal danger!

After the release of “Yeshua the Christ: The Silk Road”, there are three more novels awaiting completion and publication.  The Yeshua and Miri Novel Series also includes (in order of anticipated release): “Thomas the Twin:The Sefer Revealed”, “Mark the Scribe: The Angel’s Gospel”,  and “Princess Sarah: Daughter of the King”. A synopsis of each novel may be found on my website.


Where is your favorite place to be when you write?

Oddly enough, I don’t have a specific place where I do my writing. Since I have to constantly refer to my research materials to be consistent with the religious and cultural norms of Yeshua and Miri's time, you can usually find me sitting on the couch in my living room with my laptop perched on a pillow, a dog or two sleeping at my feet, and a hefty pile of notebooks, textbooks, and documents surrounding us all!

It depends on what part of being a writer you’re asking about! For research and interpretation of the lives of Jesus and Mary Magdalene and their times, I consistently refer to James Tabor’s “Tabor.blog” and Anthony LeDonne’s “The Jesus Blog”. In regard to blogging information, I like Jane Friedman’s blog, and for publicity tips, you just can’t beat Joan Stewart’s “The Publicity Hound”!


I want to express my sincere gratitude to you, Martin, for including me among your interviewed Indie Authors! It’s so encouraging to know that there are good people like you in the Indie community who are willing and able to provide resources to help recognize and promote new Indie Authors!