Tell me about your current Book!

When a French Spy captures one of the team members, the rest of the team must drop the current mission at hand, or else they will become a team of six instead of seven! Who is the mysterious man that warns the spy of the team’s presence, even  the spy is smart enough not to trust him! Grey and Rosa arrive in the knick of time. . . maybe.
If you get behind, you will have no choice but to call in sick or hide from your family in order to catch up with the rest of the world. The Tripper Series is growing fast and will keep moving forward, time stands still for no-one and the seven Trippers must figure out the mystery behind what is causing things to go wrong on their missions before time is changed forever. The long game is being revealed and in book four everything changes. The depth of all seven trippers is gently revealed throughout the series, slowly building their characters and purpose, for when their greater purpose is revealed, even to themselves, it is a surprise.
Did we mention time-travel, futuristic inventions already feasible, progression from food to pills, the trails and tribulations of humankind. The purpose and flow of it all comes clear by the end. 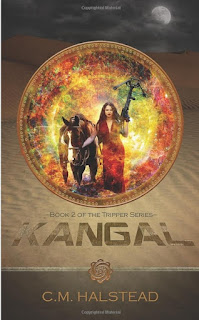 What aren’t I working on now…my brain is constantly solving world hunger (move) , determining the path to world peace (stop hating each other), and the next book of The Tripper Series.  I in the grammar editing stage of my third book, a cathartic military fiction piece titled “Earned Innocence” We can never get our innocence back, but some deserve to! I also just finished a 50,000 word rough draft of book one of a thrillagy (I may have made that word up :) It is a great “heroes journey” piece, except the hero isn’t who we think it is, and as in all my books, there is a strong underlying theme valid for all of us.

We also just returned from the Phoenix Comicon Fanfest; my first time as an exhibitor! Our merchandise and books sold well. It built confidence with me that the CM Halstead brand and books will do well in the awesome crowd that is the Comicon! It is all about fun and not taking life to seriously, which The Trippers are infamous for; you would have to be, to survive in their job!

Tell me about you?

Dude, I don’t know… ;) being a reclusive, introverted writer, I am not much on talking about myself, which is juxtaposed to me wanting everyone on the planet to read the books I pull from the nether regions of my brain!
I finally got out of my own way and am doing what I have always wanted to do! WRITE!!! I never allowed it in the past because of the programming I received when I was young, “art is cool, but you can’t make a living on it, go get a job, join the military, do something. but whatever you do, work hard!” Something along those lines. . .can anyone relate?
I decided it didn’t matter anymore. My definition of success changed, it changed from working hard at someone else’s dream and switching over to my own. All the money I used to make went into making me happy, spending on stuff and treating medical issues that mysteriously went away when I started writing. Yes, you read that right! As soon as I started writing, I got healthier. Let that sink in for a moment.
So two years ago, I started writing my first book, now I am writing my 5th book! In two years…. I am becoming a prolific author and am going to write them anyway, so it would be cool if you all would read them, my family will eat more ;) I have about 50 books in me competing to be next! I seem to be able to maintain about seven ideas at a time in my brain and still sleep at night, If I stop writing for a few weeks to a month, sleep goes away and I am forced to make time to write, regardless of what life tells me I am “suppose to be doing”.

C.M. Halstead is the product of 40 plus years of travel and exploration; a childhood as an Air Force brat and service in the Marine Corps changed him forever. He managed 84 people, negotiated multi-million dollar contracts, drove Jeeps professionally — usually at crazy angles and locals.
An astute believer in adventure, he is now doing the craziest thing ever, pursuing his passion full out and becoming an accomplished author.
Ready or not, here he comes!
Are you ready to join in as he takes you on one wild ride after another? Free your mind to worlds that may or may not be reality and let your imagination be ignited by C.M. Halstead.

Um. . .coffee of course! Preferred purchased blends: PEETS Major Dickenson blend, and the strong espresso blends from COFFEE ON THE PORCH (a small Pa shop, located in Maine). Preferred method of switching the god of all writers from bean form to liquid, is an espresso machine or old fashioned “place on the fire and let the grounds boil” method.

My favorite website? I guess it would have to be Netflix, it is the only thing I do regularly online, the only close second is when I download a game from Steam.