Tell me about yourself, Roberta.

I guess I spend a lot of time ruminating about all the energy we are made up of. Where does it go when we die? I find it hard to believe it would just – poof – disappear. So, if it doesn’t, what happens to it? I don’t mean to be morose. I just wonder about the possibilities, and I suppose that’s where my fascination with ghosts comes from. I usually do other things while I’m wondering about all this. I love to bake. My specialty is white chocolate raspberry brownies.

Tell me about your current book:

Relic is a middle-grade novel about 12-year-old Samantha Whitaker. Her parents are fulfilling their dream of running a country inn, but Sam calls it “the Ick.” She purchases a strange item in an antique shop to annoy her mother, but when that doesn’t work, she makes a desperate attempt to flee her new life by stealing her parents’ car. As she leaves, she crashes the car to avoid hitting an odd village girl who darts in front of her – then disappears. 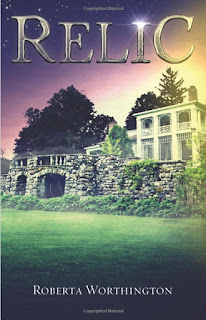 Despite Samantha’s resistance, a local girl named Twyla befriends her and aids her in looking for the missing girl. The search leads Samantha to learn about a famous former occupant – village benefactor, patron of the arts, and suffragette Olivia Ainsley Wagner Roth. According to the inn’s previous owner, Mrs. Van Dansk, Olivia still haunts the inn.

There’s an unusual relic, a hidden diary, an unfinished letter. Samantha finds she has to do some serious supernatural sleuthing to solve a mystery that has strange parallels to her own life. Relic is about friendship, growing up, and speaking up for others who aren’t able to speak for themselves.


I have a couple projects in the works. My main focus right now is Eye of the Peacock. It’s a young adult novel – meant for an audience slightly older than the audience for Relic. It’s about a 15-year-old girl named Aubrey. She’s kind of shy, kind of fringy. Her guidance counselor wants her to start doing community service, so she gets a volunteer job as a docent at a local mansion. On her first day on the job, though, she has an accident and falls down a flight of stairs. She gets trapped between two time periods -- one part of her is in an ICU, but the other gets sucked back into time. There are ghosts, a murder mystery, and romance -- everything a teen could want.  Like Relic, Eye of the Peacock is also inspired by an existing mansion.

I’m also working on a noir piece for adults. I’ve created a pretty atypical story line that I love, but the genre is a challenge for me. Not my normal voice. It’s a ton of fun to work on, but it takes a lot of concentration and effort.


I love the NPR website, http://www.npr.org/. Maybe it’s the ex-reporter in me, but they have great stories. I find so much information there. Cool stories that get me thinking – I love Science Friday -- author interviews for inspiration. They also include a ton of other websites that help with my research.