Tell me about yourself, Simon.


I relocated from the UK to Spain almost fifteen years ago, coming for work and staying for a girl. I’m now permanently settled in Barcelona with a view from the balcony of my flat that takes in the whole city and that rises above the ever-present layer of pollution.

I have had an artistic (read: starving artist) lifestyle since my late teens when I first discovered ballet. Over the last twenty years I have passed through the phases of Dancer, Actor and now Author and have yet to make much money being any of them and I am still very reluctant to call myself an Artist.

I hope one day to sell a few books and make some of the films and TV series that I dream about, but in the meantime I am content to watch the sunrise from my home and write some of the stories that I have in my head. 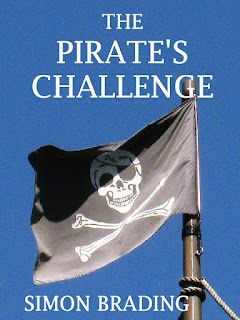 When he finds himself in the early eighteenth century aboard a pirate ship, Sam Vives must pick up his sword and fight for his life, or else die forgotten in the past.

Sam Vives was just an ordinary boy, leading an ordinary life, in an ordinary school. Until one day everything changed. He found himself somehow in the past and fighting for his life aboard a pirate ship in the Caribbean, the Captain of a crew of loyal cutthroats.

With no idea how he got there or indeed how to get home again, Sam has to compete in a bizarre contest proposed by none other than Blackbeard himself and survive the murderous attacks of an apparently insane rival, hoping that he will find his way back to his family and the ordinary life that now seems so boring but invitingly safe.

I’m half way through writing a story for a series I have planned ‘Dismal Futures’ which will be a series of stand-alone sci-fi books set in futures that are bleak and uninviting (not the books, the futures!) yet all too possible.

The one website I have to check out every day is IMDB.com to see what’s going on in my day job as an actor, but my favorite website is retrostarwars.com, there are some real gems there for a Star Wars fan.