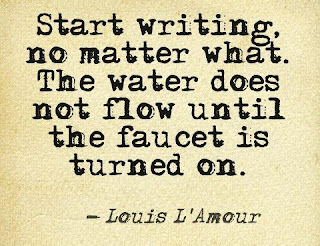 There is no friend as loyal as a book.
—Ernest Hemingway

The difficulty of literature is not to write, but to write what you mean.
—Robert Louis Stevenson

There’s always room for a story that can transport people to another place.
—J.K. Rowling

An artist's only concern is to shoot for some kind of perfection, and on his own terms, not anyone else's.
—J.D. Salinger

Logic will get you from A to B. Imagination will take you everywhere.
—Albert Einstein

I don’t have a very clear idea of who the characters are until they start talking.
—Joan Didion

Go to the edge of the cliff and jump off. Build your wings on the way down.
—Ray Bradbury

It is better to fail in originality than to succeed in imitation.
—Herman Melville
Posted by Marty at 4:00 AM