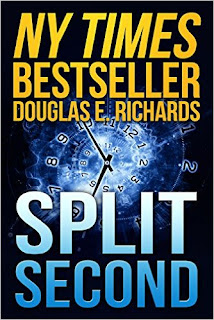 This week I read Split Second by Douglas Richards.

What if you found a way to send something back in time? But not millions of years back, to the age of the dinosaur. Not even a minute back. What if you could only send something back a fraction of a second? Would this be of any use? You wouldn't have nearly enough time to right a wrong, change an event, or win a lottery.

Nathan Wexler is a brilliant physicist who thinks he's found a way to send matter a split second back into the past. But before he can even confirm his findings, he and his wife-to-be, Jenna Morrison, find themselves in a battle for their very lives. Because while time travel to an instant earlier seems useless, Jenna comes to learn that no capability in history has ever been more profound or far-reaching.

Now, as Jenna fights to defeat the powerful forces arrayed against her, nothing less than the fate of humanity hangs in the balance. . .

I really enjoyed his book AMPED and was not disappointed with Split Second. It is a new twist that addresses a small time travel paradox in physics and the motion in the universe.

It's fast paced and doesn't have too much handwavium or boring exposition.