Tell me about yourself, JC?

I’m an author these days. Despite reading anything I could reach (or climb a bookshelf to get to) since the age of about three, it never actually occurred to me to write my own books. It took a friend telling me point-blank I should write some of the stories I told myself down to actually get me to put pen to paper. Since then I’ve written obsessively, in classes, on coaches, and occasionally by torchlight under the bedclothes while I was still in boarding school. At this point I've been writing for about twenty years – and I finally got around to publishing my first two novels just last year.

I was born in Gibraltar – almost no one knows where that is, as the entire country’s a whole 6 kilometres square, but it’s a British territory in the south of Spain, just north of the Straits of Gibraltar that divide Europe from Africa. I didn’t get to stay there long: my parents lived on a yacht at that point, and six months later, after my first Atlantic crossing, we were already in the British Virgin Islands. We moved to central France when I was thirteen, and I was sent to school in York, England, which was a bit of a shock after the Caribbean and southern Europe. In sincere hopes of moving somewhere warm, I first tried to join the Royal Navy, and then went on read languages at Aberystwyth University when that plan didn’t come off. As I now live in Canada, I’m still not doing too well on the ‘warm’, but the scenery’s a huge improvement.

When I’m not writing, I read a lot – I’m an unashamed dinosaur and prefer paperback, but I’ve recently started reading a lot more indie e-books. I also practice a variety of martial arts, which I class as book research if someone asks, and I hike and kayak around my home. 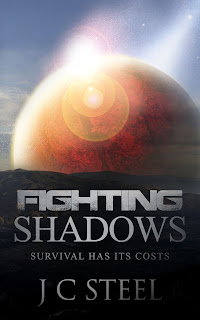 When Ilan is nearly killed by a highly-placed enemy on Corina Base, she escapes off-world, but when she finds herself in the middle of an armed rebellion, she has to risk trusting a human and confronting one of her oldest enemies to keep her allies alive and her command intact.

Cortiian politics are lethal, and never more so than when the Councils are involved. When an attack by the elite Council bodyguard nearly kills Khyria, only an unlikely association between her  most subterranean allies gets her off-world in time to keep her alive – but the safest place they can find is about to break out in a shooting war. Meanwhile, Wildcat Cortia is trapped on Corina Base under a second in command they don’t trust, with Khyria’s enemies circling on all sides to bring them down. If Khyria shows her face on Corina, she’ll be killed. If she stays where she is, Wildcat will die. It’s a sign of interesting times when the outbreak of an armed rebellion offers the best chance of survival ...

Right now I’m working on the third book in the Cortii series, the sequel to Fighting Shadows. Ilan has been sent alone to investigate a primitive civilisation, and the rest of the Cortia is under Zarlan’s less-than-secure command off-world, walking a thin line between mission parameters and a quagmire of interracial politics. Currently it’s in edits, and I’m hoping to publish sometime in summer.

Depends on the time of day, but the reliable one is the writer’s staple of coffee.

Lame as this sounds, Wikipedia. I’ve researched everything from the residue of supernovas to herbs believed to provide protection against witchcraft on there. It’s a great research spot – there’s an overview of the topic that doesn’t usually bog you down in more detail than you need, and there’s almost always source material if you need more.