Tell me about you, Lou.

When I was a child, I devoured books at the library. Our local library had a great collection of Middle Grade books. I remember rows and rows of Hardy Boys mysteries, but my favorite were the Tom Swift books: Boy inventor creates devices to solve a problem and stop bad guys. Sprinkle in some Star Trek reruns and you have the recipe for a boy who grows up to get an engineering degree.

While getting that degree, I took a semester long course on Sci-Fi that forever changed my life. I was introduced to William Gibson's Neuromancer. This was the first time I noticed how the construction of a novel affected the story (Years later, I'd read Anthony Burgess' A Clockwork Orange and realize that the language also affected the story). To get through some personal issues, I wrote a book while in college. I knew it wasn't good, but didn't know why or how to improve it.

My kidneys failed in 2000. I was one of the lucky ones, my mom stepped up and donated a kidney for me. I was sick for a couple of years before the transplant and biked to alleviate the symptoms, but the surgery fixed me right up. I had so much energy, I felt like Superman. High on painkillers and a normal red blood cell count, I signed up for a bike trip across the country. I was an ultracyclist, spending hours in the saddle enjoying nature until my disease came back and destroyed my transplant in 2008. I was forced onto Dialysis, which I wouldn't wish on my worst enemy. It's cruel and barbaric, meant to keep a patient just barely alive. I was forced to sit in a chair for hours on end. I found a story I wrote for that Sci-Fi class in college and crawled inside to escape the hell around me.

My sister donated a kidney for me in 2010. I was back to feeling like Superman and I had a 100,000 word novel completed. I joined a writer's group to figure out how to make it better and released it several years later as Recalled To Duty.

When a terrorist blows up bridges across the Mississippi, Joshua Kaine must rebuild them and capture the terrorist, before America's economy grinds to a halt and more people die. 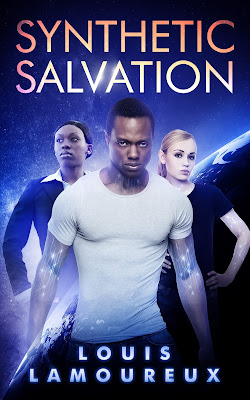 Joshua Kaine, a genetically engineered supervillain, undergoes surgical rehabilitation and is placed in the care of overzealous FBI agent Iris Halstrom. Iris would rather put a bullet in his head than see him go free on a technicality, and Joshua thinks that's pretty much what he deserves.

Joshua can't atone for his sins while chained to a desk job. He buys a bicycle, ditches Iris, and sets off to find salvation. Along the way, he's judged by the color of his skin, harassed by police, and assaulted by racists.
When a terrorist blows up bridges over the Mississippi, jeopardizing America's fragile recovery, Joshua agrees to spearhead the reconstruction effort and vows to catch the saboteur. Can he do both before the villain strikes again? And when he catches the terrorist, can he convince her to change sides or will she kill him instead?

A sequel to the novel Recalled to Duty.

A fantasy trilogy.  When a portal opens, letting giant wolves through to our world, Beauregard Kingfisher gains magical powers that are unleashed when he sleepwalks. He must defeat the wolves and recover the amulet holding open the portal or his world will be overrun with wolves and demons.
What is your favorite beverage while you write? As a transplant recipient, I rarely drink alcohol and as an athlete, I tend to avoid soda. Nine point nine times out of ten, I have a very tall glass of ice water on my desk as I write.

My favorite website/App is Zwift.com. Riding indoors is inherently boring and mentally harder than riding on the road. I can plug my trainer into Zwift and it creates a virtual world on the screen for me to pedal through. I can do a workout, compete against people from across the globe, or just ride along. I've been able to do some pretty impressive distances that would have seemed unthinkable before Zwift came along. As an aside, ultradistance cycling is good mental training for writing a novel. They both require stamina, dedication, and an iron will to finish.