Tell me about yourself, Tony.

What to say? I'm more of an accidental writer than anything else. Unlike most of the other writers I read about, I never had a burning passion to write. Probably, because I never thought I had anything interesting to say. At one time I thought it would be great to be a journalist, just because it sounded interesting. Since my teens I was an avid reader and a few times read such dreadful stuff that I wondered if I could do better, but never did anything about it. In my younger days I didn't have the confidence to even think about it.

Art was the first passion in my life, but that was pushed aside by the second: Travel. I had the urge to visit different and exotic places. After living all my life in the north London suburbs anywhere else was considered exotic! On my first trip I went to France. ( I headed for the French Riviera in hopes of becoming a gigolo, but for some reason that didn't work out.) I accidentally ended up in Spain and after that Germany. By that time I was hooked on traveling. I took any crap work to finance my next trip.That was the pattern of my life for many years.

To cut a long story short: By  the early 80s it was becoming increasingly more difficult to find work to finance my trips, so I decided to get a qualification that I could take with me. That's how I entered Higher Education and studied for a degree. The choice was: Staying on the dole or going back to school. During my gap year I had the opportunity to start off a student exchange program in Guatemala C.A. I had previously visited Guatemala and had loved the place, but didn't stay long as I was running out of money. Anyway, while there a malicious god decided to play with me and a local latina stole my heart. (she still won't give it back!) I returned to England to finish my degree, which wasn't worth toilet paper by this time and resolved to get  back to Guatemala as soon as possible. It was when I graduated that I sat down and tried to write.

The idea of writing came from the encouragement of others. After writing six pages of my first novel I suffered acute writer's block, but I took those pages with me when I returned to Guatemala. There, for some reason, I was able to continue writing it. By the time I had finished it, I was hooked on the idea of creating stories and have continued to write. I went on to write  another five  and at the moment I'm on my seventh. So far, only one has been published. 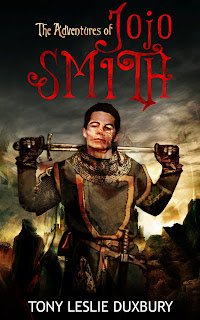 When he is the victim of forced time travel, Jojo Smith must do something to resolve the issue of his return to his own time and planet, because the arrogant magician that caused his problem isn't listening to his pleas to be sent home or else be trapped on a medieval world for the rest of his life.

Ever wonder what it would be like to suddenly wake up and find yourself on another world? Especially on a world that was only in the medieval stage of development. How would you feel? Happy with the unexpected adventure or terrified and shitting bricks? What would go through your mind? You can find out by reading the Adventures of Jojo Smith and see how he dealt with the situation. Warning: this novel is only for those that have the imagination to see themselves in the same situation. If you don't take yourself too seriously you'll enjoy this medieval romp.

I am trying to ready my second novel for publication and avoid making all the mistakes I made with the first one.


What is your favorite beverage while you write?

I tried lots of alcohol and it worked brilliantly. The words really flowed, but I couldn't understand a word I'd written the next day. That is, if I hadn't accidentally deleted it! Now, I stick to coffee and tea. It's not as much fun, but at least I can read what I have written.