Tell me about yourself, S.L.?

I started writing when I was twelve, and I’m now 26. “Grim Crush” is my first novel, and I just released a second one titled “Dreamvision”. I consider myself a kid-at-heart because I love playing games (board, video) and I like chocolate chip cookies! I also love dancing and warm weather. 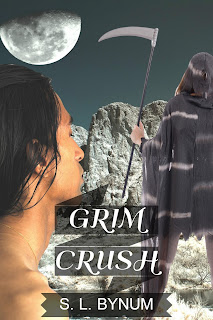 When she falls in love with a human boy, a grim reaper named Xia must protect him from the Angel of Death, or else his soul will be at risk.

Xia is a seventeen-year-old grim reaper who enjoys doing things her own way. She thinks nothing can be better than having her own scythe and helping the souls of the dead enter purgatory. That is, until she meets Shilah, a Native American boy her age. For some reason, Shilah can see her, while other humans can’t. One of the Rule of Reaping is to never show yourself to the living, but Xia can’t help that Shilah can see her. As she pretends to be human to get close to him, she finds herself falling for him, which breaks another Rule that says reapers can’t get emotionally involved with the living. When she can no longer keep her lie, she tells Shilah what she is and he accepts it, for he has fallen for her too. Just when things seem to be going good for them, Xia’s boss and father, the Angel of Death, realizes she’s been breaking Rules, and now Shilah’s soul is in danger. Xia becomes determined to save Shilah, but can she do it without putting the balance of life and death at risk?

The sequel to Grim Crush!

Rdio.com. I’m kind of a music buff, and you can listen to entire albums on this site!
Links: