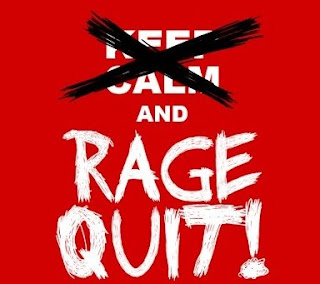 I have heard that these things happen but it has never happened to me. No this is not story for Penthouse Forum. It happened at yesterday's Writers Group.

This is my favorite Writers Group. It gives, by far, the best feedback of any writers groups I have ever attended. We are a critique group. Members submit chapters, short stories, outlines and the group helps make them better wit honest feedback.

We had a first timer submit a story this week. He told us he had been writer and working on this story since 1982. It was a time travel travel story that had an autobiographical flavor. I actually liked the premise and told him so.

We began talking about copyrights because he had a lot of references to musical works. Practical advice about avoiding landmines of copyright. When were began noting that there was no hook to capture the reader early, he slammed his hand on the table and stormed out. Without discussing any of it.

I guess we called his baby ugly. This grand opus he had worked since 1982. He was expecting high praise. He was so close to the work even the mild suggestions we gave set him off.

After he stormed out, we were in shock for a minute. We discussed what we may have done wrong. The only thing we realized is that a new member should attend and observe the process before presenting an item. See how the group works. That way they can get to know what to expect.

I keep thinking there needs to be a Sitcom called The Writers Group. This would make a great episode!

--I hope he publishes his work one day. If that is what he really wants. Because user reviews are far worse.