Tell me about yourself, Coreena?

My name is Coreena McBurnie and, ever since grade 5 when I had to do a report on Theseus and the Minotaur, I have had a soft spot for Greek mythology. When I hit university, I was drawn to the Classical Studies department, where I studied the archaeology and culture of the ancient Greek and Roman worlds -- and also where I managed to read Homer's Odyssey, one of my favourite books, in the original Greek, something which was thrilling for me (I know, sounds crazy, but the poetry and scope of the original text is amazing). After a lifetime of "what is that?", "why did you study that?", and "what can you do with a degree in Classical Studies?" I have decided to write novels based in ancient myth and to bring so many of the stories I love to life for a modern audience, with my own spin, of course. 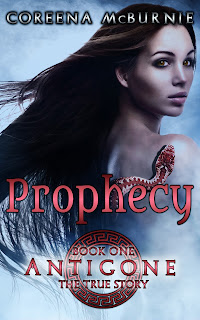 When the gods start speaking her, Antigone must decide where her allegiances lie, or else risk losing everything she holds dear.

An ancient princes, hidden prophecies, impossible choices...
Sixteen year old Princess Antigone, daughter of the infamous ancient Greek King Oedipus, wants to lead a normal life and fulfill her duty to the gods, her city, and her family, but fate has other plans. The Olympian gods bless her, the snakes talk to her, her parents want her to marry a foreign prince, her embroidery looks like burial shrouds for dogs, and she has fallen in love with the wrong boy.

When the mysterious and devastating prophecies surrounding her family are revealed, Antigone must choose where her allegiance lies: With the gods who have betrayed her family but who she is obliged to serve? With her plague ridden city? With her family which lay in ruins? Or even with herself?

In Prophecy, Book One of the Antigone: The True Story series, Antigone steps out of the shadows of the past to tell her own story, a story where truth of history is stranger than the fiction of myth.

I am currently working on Book 2 of the Antigone series, called Fate, as well as editing another novel about Clytemnestra, who is notorious for killing her husband, Agamemnon, when he returned from the Trojan War.

Tea, all sorts of tea!

My recent favourite web site is Seventh Sanctum (http://www.seventhsanctum.com). This is a random idea generator where you can set various parameters. I am working on trying out some new styles and love the quick ideas here -- so many are fun and quirky and things I never would have thought of on my own, but which lead to interesting places.