Let me give you the standard bio first: 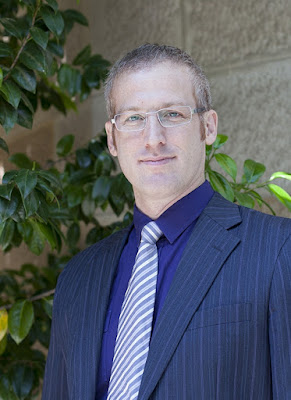 Assaph has been a Romanophile ever since he first got his hands on Asterix, way back in elementary school. This exacerbated when his parents took him on a trip to Rome and Italy - he whinged horribly when they dragged him to "yet another church with baby angels on the ceiling", yet was happy to skip all day around ancient ruins and museums for Etruscan art.

He has since been feeding his addiction for books with stories of mystery and fantasy of all kinds. A few years ago he randomly picked a copy of a Lindsay Davis' Marcus Didius Falco novel in a used book fair, and fell in love with Rome all over again, this time from the view-point of a cynical adult. His main influences in writing are Steven Saylor, Lindsey Davis, Barry Hughart and Boris Akunin.

Assaph now lives in Sydney, Australia with his wife Julia, four kids and two cats. By day he is a software product manager, bridging the gap between developers and users, and by night he's writing - he seems to do his best writing after midnight.

As for the non-standard version - I’ve loved reading since the age of 5, when I found out I can’t just run around outside all the time. I’ve had my nose buried in a book throughout my life. My darling wife got me a kindle a few years ago. She knows me better than anybody.

A couple of years ago I lost my library of a couple thousand books to an ex-wife, her mother and a bonfire. I now treat reading – and writing! – as a sort of sweet revenge. Literature, like all art, is eternal.

When a young man is found dead with strange tattoos all over his body, Felix must find his killers – or else he won’t get paid, which means no money for wine. 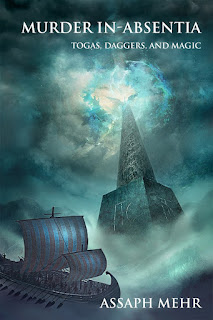 Oh yeah, the people that killed the young man? They were necromancers.

A young man is found dead in his bed, with a look of extreme agony on his face and strange tattoos all over his body. His distraught senator father suspects foul play, and knows who to call on.

Enter Felix the Fox, a professional investigator. In the business of ferreting out dark information for his clients, Felix is neither a traditional detective nor a traditional magician – but something in between. Drawing on his experience of dealing with the shady elements of society and his aborted education in the magical arts, Felix dons his toga and sets out to discover the young man’s killers.

Murder in absentia is set in a fantasy world. The city of Egretia borrows elements from a thousand years of ancient Roman culture, from the founding of Rome to the late empire, mixed with a judicious amount of magic. This is a story of a cynical, hardboiled detective dealing with anything from daily life to the old forces roaming the world This is a story of Togas, Daggers and Magic - it will appeal to lovers of murder mysteries, ancient Rome and fantasy.

I’ll only leave you with what one of my beta readers told me:

“This book gave me a ‘book-hangover’ – I could not get my head out of the world of Felix for days after finishing it!”

If you like any two genres out of mysteries, fantasy and historical fiction – this book is for you!

No wait, that’s my day job.

… and my night job too, apparently. The life of an indie author is one long learning curve. In the past year I’ve learned what it means to write a novel – followed closely be the meaning of “first draft”. I learned about editing, book producing, book publishing, and book marketing.

When I started writing it was to scratch an itch – now I have ten more itches that need to be scratched. Luckily I enjoy the process tremendously. I find all aspects of being an author challenging, frustrating and fulfilling at the same time.

In between all that, I’m writing the second Felix the Fox mystery as well as a few short stories. The short stories are available on http://egretia.com, and – without divulging too much – the next Felix book is titled “In Numina” (that’s not a spelling mistake) and deals with some peculiarly haunted houses.

Scotch. A good scotch is like a good woman – it should be single (malt) and of legal age.
… or a Martini. Tanqueray, 5-to-1, olive. Stirred gently.
… or homemade* vodka, because I write after midnight and that’s just there.
I also drink large amounts of extremely potent coffee – but I do that during the day to recover from a night of writing.
(* I wasn’t joking about the ‘home-made’ part).

So I can’t pick my own site or Goodreads? Damn…
Quora.com is probably where I spend far too much time. It is a questions-and-answer site, but done absolutely right. There are plenty of users who offer expert answers. I learned a lot about a few favourite subjects there, and am very active on the topics of ancient Rome and Martial Arts.
Posted by Marty at 4:00 AM