One of the most common questions I receive from readers via email or at literary conferences is, “Why do you write science fiction?” or “How do you come up with these stories?”.

For me the answer is easy. I write the kind of stories I enjoy reading.

I have always been an avid reader. I was born in 1959 and during the 60’s and 70’s my parents were all about reading. Our house had the biggest library of anyone I knew. As a kid, I only got toys on my birthday and Christmas, but I could have books when ever I wanted. My mother took us to the library every week. There I discovered Isaac Asimov, Robert Heinlein, Philip Dick, Arthur Clark, J.R.R Tolkein, Ray Bradbury, H.G. Wells, Mary Shelly, Bram Stoker, Larry Niven and so many more. In school we studied Jules Vern and George Orwell. 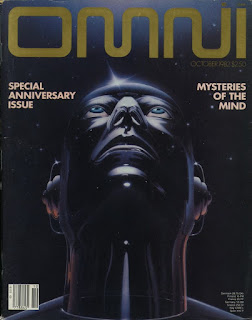 It was also an exciting time for Science. Man was on the moon. Computers were becoming common place. The pace that the world and my imagination were changing was astounding. In the late 70’s while my friends were buying Penthouse and Nation Lampoon, I was addicted to OMNI Magazine.

I am a firm believer if you want to be a writer, follow this advice. Stephen King said, “‎If you want to be a writer, you must do two things above all others: read a lot and write a lot…reading is the creative center of a writer’s life…you cannot hope to sweep someone else away by the force of your writing until it has been done to you.” I was already doing the reading side of that equation by the time I got serious about writing at 54 years old.  I read about a hundred books a year. Most of them are science fiction. I will never in my lifetime be able to read all the books I want to read, so priorities are essential.

“But why science fiction. Specifically?” They ask.

There are several reasons. Good science fiction has excellent character development, great plots, and exciting settings, just like any genre. But it also allows incredibility creative world building.  A simple romance story can be made far more interesting by adding this additional dimension. The romance could be set in the far future, or involve time travel, or after a dystopian apocalypse. Adding the science fiction aspect allows the writer, and reader, to stretch their imagination even further. The classic story, “Boy-meets-Girl, Boy-Loses-Girl, Boy-Wins-Girl” becomes, “Man from the future has to decide between Love and Time itself.”!

There is another aspect to science fiction that is often forgotten. It is easy to make a subtle social commentary using science fiction. If an author isn’t careful, social commentary can be too much if it drowns a story in it. Subtle themes are my rule.  I can remember watching the original Star Trek on TV as a kid. I remember vividly an episode titled, “Let That Be Your Last Battlefield” staring Frank Gorshin and Lou Antonio in the winter of 1969. In the episode, the Enterprise picks up the last two survivors of a ruined planet, who are still trying to kill each other aboard the ship. These were men that were black on one side and white on the other.  Mirror opposite of each other. I was nine years old. That story, while full of space ships, aliens and action-adventure taught me about the futility of bigotry using Scifi. I remember, when it was over my father simply saying, “Wow.”

Martin Luther King Jr. had been murdered less than a year before. As a kid I didn’t understand the irrational hate of his assassination until I watched that episode of a Scifi TV show.

Over the following 50 years and thousands of books later, science fiction is more relevant than ever in books, movies and television.

As I look down at my smart phone and ask Siri a question it strikes me that I live in the future! My phone understands me as well as the computer on Star Trek. The information within is as immense as the ones on the show.

Email ThisBlogThis!Share to TwitterShare to FacebookShare to Pinterest
Labels: Musings