Tell me about yourself, Mo.


I’m a retired IBM applications engineer having started back in 1965 with an Associates degree in Electrical Technology from VTC. While working for IBM I acquired my B.S. in Mathematics degree from Trinity College. In later years I was a presenter at, and one-time chairman of, the memory test group at TUG conventions held yearly throughout the country.

After 37 years with big blue, I was retired and started working for an Air Force Colonel (Ret.). He hired me as a part-time printer repairman. To qualify I had to disassemble and reassemble an HP 1100 LaserJet printer. He didn’t ask me to fix it, just take it apart and put it back together, which I did. He told me that every certification I earned would affect my paycheck. He later regretted it.

During the next several years I augmented my education learning many types of printers, telephone systems, and network skills. After several years that type of work dried up and I was back working part-time. When I was laid off this time I decided I needed employment that was both interesting and rewarding; and that I couldn’t get laid off from. So, I kept my best customers and continued working from home a few more years fixing printers. That’s when I started my first novel titled ‘For Lorne’. At present, I’ve published 9 books in print and a couple of dozen eBooks.

Hobbies and other interests:


I have been a musician since I was a teenager in high school. Learned violin in grade school but my interest led elsewhere. As the ‘60’s came along I took up the 5-string banjo and guitar. During college, I played lead guitar in a rock and roll group. Later on, while in the Navy stationed in Alaska, I played 5-string banjo in a folk group on a little island called Adak. After the Navy, I was hired by my cousin as a rhythm player which quickly turned into being the bass player. Picked up mandolin along the way.

Tell me about your current book: 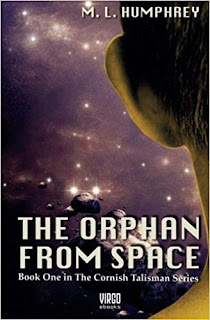 I have several projects in progress as my mind is continually coming up with new ideas. The recent ones are short stories bordering on Novelettes in size. One is a little horror piece about a man, his doctor and a dead man who thinks he’s still alive. Another is about a man who has been impressed with several sets of memories. The latest is about a dying man and a girl he meets in a graveyard.


Other than short stories I have two novels in progress. The first is sort of a sequel to my Cornish Talisman Series called ‘My Grandfather’s Spaceship’. Oddly I started this project several years ago and couldn’t seem to get it going. Instead, I came up with the idea to write a story about how the grandfather came to have a spaceship in the first place. That turned into ‘The Orphan from Space’ which, in turn, spawned four more books in the series. To me, at that time, it was a massive undertaking and I enjoyed it immensely.

I had a new idea for MGS and all of the material I had previously written was relegated to another new storyline called ‘Time Fog’ where it now resides. Someday I’ll get back to that one. My motto is ‘don’t throw anything away’. MGS takes place about 40-50 years after book 5 of the Cornish Talisman Series and features some of those characters. I think the story needs a little more excitement so I’ve set it aside for the time being.

The other novel has been a lengthy undertaking. It is essentially a prequel to my first novel and contains a small part of it as well. The title is ‘Battle for Lurandor’ and the setting is sort of ‘long ago and far away’.

It has not been easy combining a piece from the first novel about the starship ‘For Lorne’, a sequel I had written but never finished called ‘Colony’, and a novella that I published under the title of “Beneath the Double Suns’, but I think it is necessary. I have taken these three pieces and glued them together with a new beginning and ending. The story arc spans over two generations. Considering the different POV’s and tenses involved the editing has been exceedingly difficult.

I also have plans for at least one anthology to showcase some of my short stories and novellas. Other than music and writing stories, I also belong to a writing group called Critters.org.

But science fiction is not the only thing I’ve published. A few years back I wrote two stage plays including songs and fake advertisements. Both have been performed live by a group we belong too.

Other than Fiction, I have also written a couple of history articles about the town we live in for the local newspaper and have been asked to write a piece for the history space section of the nearby city newspaper as well. That is still a Work In Progress.


The best place is at the computer in the den. When traveling I would bring a notebook and write notes on current projects as well as any new ideas that come along. Appropriate titles are sometimes the hardest thing to come up with. On the sequel to my first novel, I explained the story to my 10-year-old grand-daughter and she came up with the perfect title, ‘The 5th Agent’.


I think it’s more about the important things I’ve learned. Not only about how to write but how to deal with the finicky publishing industry as well. Probably the most important thing I’ve learned is to do it my way. Some of my critiques have contained useful points about grammar and punctuation, and for that I’m grateful. But, I draw the line when they start to say I should have done this, or that, another way. Sure, I could have had the hero jump back in time to save the girl, but that wasn’t the plan. Yes, I was tempted, but no. Then there are times where I can plan the whole storyline from just a few scenes and tell myself that it is going to do this and that and ending up this way. Hah! As Terry Pratchett once wrote, “The first draft is just you telling yourself the story.” And it often disagrees with the ‘plan’. Sure, scenes can be wonderful to work with but most often they just don’t go anywhere without inspiration and a goal at ‘the end’.

For inspiration, I draw on many of the old masters that I enjoyed when I first started reading. Now I go back and look at what they have written and wonder if they would even survive the way things are now. Even so, that’s the type of writing I emulate. Nowadays it’s called ‘Young Adult’.

The use of foul language may seem to draw some readers just like nudity in movies. And, in some cases, it may well be realistic for a given situation. But a good story doesn’t need it. Hey, I was in the regular Navy and yes, sailors do swear. But the ones that were really vulgar didn’t.


I don’t really have one although I use a lot of them while doing research.