Tell me about yourself, Greg?

I will put the things here that I didn’t put in my public bio. I’m a Navy brat, my dad was stationed at the El Toro Marine Air Base when I was born and we ended up settling down in that part of SoCal. I attended a Catholic school in Tustin, California, until high school which is why I’m no longer Catholic. I’ve been a voracious reader since I was a child: fantasy and science fiction being my first true loves. I was obsessed with the Lord of the Rings and was voted Most Likely to Read It 1,000 Times by my junior high class. I had decided by the time I was twelve to be a writer and by fourteen I was submitting my horrifying stories to Omni, The Magazine of Fantasy and Science Fiction, and several others who shall remain nameless. Oh yeah, those stories were horrifyingly bad. I spent the next decade collecting rejection slips and hiding them in a drawer. I never told anyone I was writing and submitting stories, I was too embarrassed.
I kept at it and when I was twenty-four years old I won a short story contest in the Orange County Register. After that, I decided to get off my ass, stop surfing and bartending, and go to college to study writing. I ended up a graduate of the University of California, Berkeley, with an English degree and a minor in Chinese studies.
I was hired out of college as an assistant at a Los Angeles magazine publisher, and after I had impressed my bosses with some unsolicited pieces, I was moved up to associate editor three months later. I also discovered I hated magazine writing. I ended up leaving after four years and moved to Portland, Oregon, where I met my wife of now fifteen years. After relocating to Houston, Texas, I experienced a series of catastrophic injuries that led to multiple surgeries (when you turn 40 your warranty expires, btw) and I didn’t write a word for the better part of 7 years as I spent my time recovering and being a stay-at-home dad to my kids. When the munchkins were old enough to be bored with me I committed myself to my dream of writing a novel and… here we are. 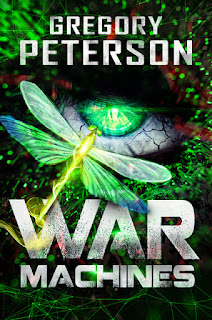 Aloysius Leigh is a former elite Marine turned high-tech thief. In the aftermath of a heist gone sideways, the technology he was meant to steal invades his body - and leaves him holding the bag
for murder. While the explosive technology seizes control of his body. Leigh must also do battle in the real world as he is hunted by the Russian mob, the FBI, and his former counter-terrorist unit who would like nothing more than to get their hands on the dangerous machines swimming around inside of him and who definitely wouldn't care how. Leigh is alone and running out of time in a war where his very body and mind are the prize. He is outmanned and outgunned - with no friends, no allies, and nowhere to turn.
What he does have is a plan.

Right now I’m working on the sequel to War Machines. I also have a separate urban fantasy novel outlined and sitting on the back burner ready to go, but I am hesitant to go after that one right now. The issues it deals with are profound to me and I’d like to grow a little more as a writer before I tackle it.

What is something that people don't generally know about you?

I have dysgraphia and all its attendant little buddies that travel along with it. If you don’t know, dysgraphia is a specific learning disability as well as a transcription disability. Simply put, it’s a deficiency in the ability to write, primarily handwriting but also coherence. It also overlaps with other neurological disabilities like ADHD and developmental coordination disorder (DCD). So basically, I’m genetically hardwired to not be able to write and to be an uncoordinated klutz.
So I decided to become a writer, musician, and athlete. Fuck you, genetics.

My favorite lesson and best piece of writing advice go hand-in-hand. Finish it, and write your first draft like no one is looking (cause they’re not).
I learned those from Neil Gaiman when he came to do a talk in Houston. I was stuck on the first act of my book and couldn’t move forward. He talked about those two subjects and it was like a giant kick in the ass. You can’t do anything if you don’t finish it. The second is more about learning to turn off that inner critic in your head that’s reading over your shoulder as you write. Those were transformative pieces of advice for me. I would hear Neil’s lilting British accent in my head every time I sat down to write, “Finish it.” Over and over I would hear him in my head while I wrote my way to the end.
I had Finish It carved into a piece of wood that hangs over my writing desk.