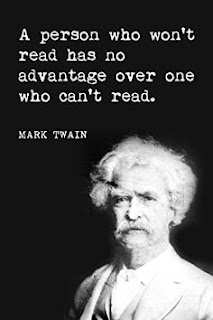 Keep a notebook. Travel with it, eat with it, sleep with it. Slap into it every stray thought that flutters up in your brain. Cheap paper is less perishable than gray matter, and lead pencil markings endure longer than memory.
—Jack London
Write freely and as rapidly as possible and throw the whole thing on paper. Never correct or rewrite until the whole thing is down.
—John Steinbeck
The humorous story is told gravely; the teller does his best to conceal the fact that he even dimly suspects that there is anything funny about it.
—Mark Twain
Everybody is a Genius. But If You Judge a Fish by Its Ability to Climb a Tree, It Will Live Its Whole Life Believing that It is Stupid.
—Albert Einstein
Go a little out of your depth, and when you don’t feel that your feet are quite touching the bottom, you’re just about in the right place to do something exciting.
—David Bowie
Anytime anybody tells me the trend is such and such, I go the opposite direction.
—Clint Eastwood
There are three rules for writing a novel. Unfortunately, no one knows what they are.
—W. Somerset Maugham
Posted by Marty at 5:00 AM