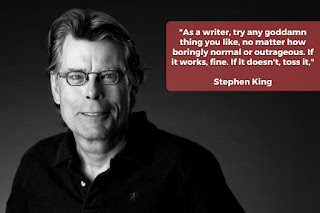 If I'm going to sing like someone else, then I don't need to sing at all.
—Billie Holiday

I'll be writing records until I'm dead, whether people like it or not.
—Alanis Morissette

Write every day, line by line, page by page, hour by hour. Do this despite fear. For above all else, beyond imagination and skill, what the world asks of you is courage, courage to risk rejection, ridicule and failure.
—Robert McKee

I do believe that tenacity counts. Not going away matters.
—Carole King

There were times when I was afraid I would never sell another book, but I never doubted I'd write another book.
—George R.R. Martin

All you need is a sheet of paper and something to write with, and then you can turn the world upside down.
—Friedrich Nietzsche

If it wasn't hard, everyone would do it. It's the hard that makes it great.
—Tom Hanks

Have a belief in yourself that is bigger than anyone's disbelief.
—August Wilson

Nothing will stop you being creative so effectively as the fear of making a mistake.
—John Cleese
Posted by Marty at 5:30 AM