Tell me about yourself, Emma.


I'm an author from Maine and my name isn't Stephen King, although I do have a house down the street from the high school where he used to teach. I also went to the college where he studied journalism. I enrolled thinking I was going to become a kick-ass girl reporter, like Nellie Bly, and then I spent a Christmas Eve on the shores of an icy river waiting for rescue divers to pull a body out of the water. That's about when I decided that journalism wasn't the path for me. I knew I wanted to write, but I didn't know what. So I just wrote everything. Resumes, blog posts, product descriptions, short stories, web content, poems, Instagram captions, books. These days, I've managed to narrow the list down a bit. When I'm not writing novels, I write mostly web content, whitepapers and blog posts for companies with big ideas.


Nothing's Ever Lost launched in July of this year, on my 32nd birthday. It's a story about two teenagers trying to hold their friendship together while adventuring through the afterlife. The main characters are basically the 17-year-old versions of me and my friend "Jack." They're snarky and silly, and trying really really hard not to show anyone how supremely uncertain they are about basically everything. I call it a YA novel, and it mostly is, but adults seem to like it just as much as teenagers do. 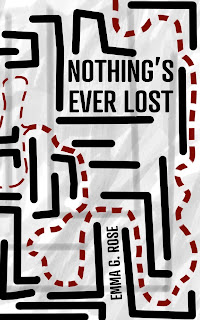 When a car accident kills them (probably), a pair of teenagers must brave the afterlife, or else...there's no or else there's just the afterlife and all its strangeness. I guess the other option would be to sit down on the ground and just wait for the world to end. But that doesn't sound like much of an adventure, does it?


Two things. Thing 1 is an urban fantasy novel about an EMT named Eric. After recovering from a freak accident, Eric starts seeing ghosts. At least, he thinks they're ghosts. They only seem to show up when one of his patients is close to death. Speaking of Death, he's not thrilled about Eric's newfound abilities. Humans aren't supposed to see the souls of the nearly departed and they're certainly not supposed to talk to them. Where did Eric get this inhuman power? Can Death put a stop to it before bureaucracy gets involved? If he doesn't solve the mystery quickly Eric may not be the only one who has to pay a price. Thing 2 is a secret for the moment. I can't tell you anything about it except that I'm a co-author and it involves a jackalope, a man who doesn't know who he wants to be and a violin that turns into a fiddle at the slightest provocation.

Tell us something that people don't generally know about you:


That's a hard one. I'm pretty much an open book...oh, the G in my name doesn't stand for anything. It's just a letter.


Writing may be a solitary task, but it's the only part of the process that is. You might think a writer's life is just sitting in a room alone pounding the keys all day, but you also have to talk and listen and network and edit and market and all of that involves other people.

What is the best piece of writing advice you give to new authors?


Writer's block is not a valid excuse for not writing because it doesn't actually exist. If you think you have it, you either don't know what you're trying to say or are so worried about saying it perfectly that you can't get anything out at all. The cure for both problems is writing until you figure them out. So really, there's no excuse for not writing.