Beard aside, I am not the evil twin. He has a goatee, which as Star Trek taught us is far more evil than a beard, and is a computer engineer, making him an angry engineer during crunch times. Of course an angry engineer is one short hop away from being a full blown mad scientist.

The obvious joke that he’s the left brain and I the right has some basis in reality, but the really interesting thing about us is that I apparently got his sense of smell as well as my own – my nose is sometimes painfully sensitive while he has trouble with normal scents at times.

But enough about my doppelganger. I’ve been writing stories since almost before I could read. They were comics at first, a lot of which were adventures with mercenary penguins, as well as some fantasy. I published my first novel, a Blue-Collar Sci-Fi coming of age story, back in April, followed up by a Steampunk suspense/adventure novel a few months later.

Even outside of writing I live and breathe books. I’ve worked for my local county library system for more than a decade now, and I have one semester left to get my Masters of Library Science. It really is a special privilege to be able to recommend awesome books to all the people who come through my library.

It’s also a lot of fun doing the programs, like the bilingual storytime, (English and Spanish) the system’s yearly anime convention, and my weekly Dungeons and Dragons game for teens.

Yes, I get paid to be Dungeon Master for a Dungeons and Dragons game. As cool as that is, it can also be challenging. You will never run into a D&D player more vicious and bloodthirsty than a twelve year old girl who is really getting into it. 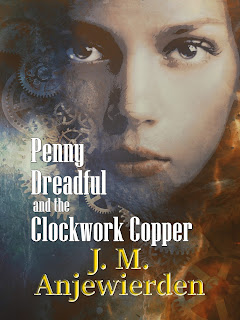 Penny Dreadful and the Clockwork Copper

Viva was born to be the perfect spy. Well, that’s not strictly accurate. She was built to be the perfect spy. With the mind and knowledge of the best police clockworks, the diligent and intimidating coppers, and the body and instincts of the sultry companion models, Viva is capable of playing a servant, companion, or real woman. The trouble is they built her better than they realized. She is no mere automaton, blindly following her imprinted knowledge and orders. No, Viva-3 can think for herself, and say no to her masters.

Of course, the moment they realize this, the secret police will simply destroy her and start again. They’re unconcerned with killing the people they’re supposedly sworn to protect, so of course they wouldn’t hesitate to terminate a mere clockwork, whether built of metal or flesh.

Her latest mission is to go undercover and discover the identity of the city’s notorious vigilante hero, Penny Dreadful. He has started interfering with the coppers as well as the criminals, and the secret police want him stopped. Of course, they suspect the heir of one of the most respected Lords, so caution is key.

Viva must follow her orders and avoid any hint of suspicion that she is more than she seems, both with the Reed-Brooks family and her masters, or risk discovery and death. One question remains for Viva: In her quest to be free, would Penny Dreadful be more useful as an ally instead of an enemy?

I am at present working on the sequel to my first novel, The Long Black. Our heroine, Morgan, having finally succeeded in becoming an officer on a star freighter, just wants to forget her past, forget the horrors of her childhood and the recent violence of the pirate attack on her starship, but she’s having problems letting go. Her friend Emily suggests Morgan take a vacation, come visit her estates on the nearby planet Albion. Of course, her friend is also a Baroness in her own right and a former officer in Albion’s Marine Corps, with enemies of her own…

The Assassination of Lady Emily will be out by April, grad school and infant son permitting.

I do pretty much all of my writing at my computer desk in my bedroom, out of necessity really. A week after I graduated high school I was in a car accident and broke my back in three places. All things considered I am incredibly lucky and blessed – I can still walk and get around pretty much fine, really – but I do have to limit my chair time, especially if the chair isn’t really good.

“There is no new thing under the sun” was true when it was written a couple millennia ago, and it is true now. There will always be another author who wrote the same basic premise as you are working on, but that doesn’t matter. You could give the same premise to a hundred authors and set them loose, and get a hundred different stories out the other end. What matters is how you as an individual approach it.

That’s a tough one. As far as writing goes, I’d have to go with MadGeniusClub.com They have so many resources for new authors to help them with everything from outlining to formatting, book covers to marketing. Plus they keep a decent eye on current events, and have a lively comments section.