Tell me about yourself, Magnus?

While my books are not autobiographical in a literal sense, there is a lot of me in them. Like most people, I have created a comfort zone around myself that attempts to emulate aspects of my childhood.  I have spent more than half of my life outside of my native Germany. I have willingly – and happily – lived and travelled on a shoestring and off, in places in and out of Europe and put myself in situations where I’m the proverbial ‘outsider looking in’; close to, but on the margins of, well, for a lack of a better word, ‘society’.

That’s where I feel at home, no matter whether it’s South America, the Middle East, the Caribbean or Spain (where I’ve lived for seven years). I always endeavor to learn the language and adapt as much as I can. And I’m successful at it, to a point.

And that’s where my narratives set out from, my personal vantage point from the outside peeking in. The drama arises from the protagonists’ yearning to be part of something that’s essential alien to them, but without getting too close. Of course they get burned, sometimes severely. There’s such an enormous potential for antagonism that I think I could write for the rest of my life.
That’, at least, is the plan. 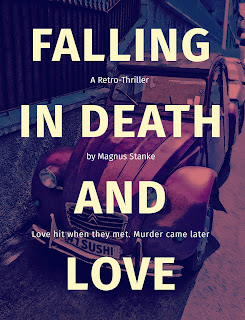 When cupid’s lightening strikes, Aurora and David are ready to turn a Mediterranean romance into happily ever after. But in post-dictatorship Spanish Mallorca, a holiday paradise can turn deadly at the drop of a match.

It’s no fun being the mouse when fat cats shoot sharp.

The year: 1977. No internet, no mobile phones; tablets cure headaches not boredom.

David falls hard for Aurora and vice versa, but the holiday is over. When she returns she isn’t alone, the deadly chase already underway. First the hitmen then the police.  ‘Falling in Death and Love’ is a hard-boiled, heartfelt thriller, a breathless ride through times of change. Love, guilt, paternity, murder - probably not in that order.

Another thriller, another ‘Retro-Thriller’ at that. My new book ‘Time Lies’ (UPDATE:  Now Available) is set in Cold War Germany of the 1980s. The story deals with a reluctant serial killer who realizes that he has been murdering the wrong people. It’s not a comedy, though at times darkly comic. Think North European Neo-Noir…

For the first draft I have to write at home, and according to pretty set routines. In later drafts I can work anywhere as long as I can plug in my laptop

The other site is www.theplaylist.net – and again, it’s film related. In this case they review new films, not digital home entertainment. Between these two and imdb.com I could browse endlessly, and I do, mostly when I should be writing