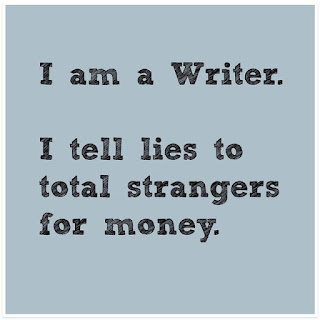 The function of science fiction is not always to predict the future but sometimes to prevent it.
—Frank Herbert

Be still when you have nothing to say; when genuine passion moves you, say what you've got to say, and say it hot.
—D. H. Lawrence

Tell a story! Don’t try to impress your reader with style or vocabulary or neatly turned phrases. Tell the story first.
—Anne McCaffrey

Writing is finally about one thing: going into a room and doing it.
—William Goldman

It is impossible to discourage real writers—they don't give a damn what you say, they're going to write.
—Sinclair Lewis

An age is called Dark not because the light fails to shine, but because the people fail to see it.
—James A. Michener

Anytime anybody tells me the trend is such and such, I go the opposite direction.
—Clint Eastwood

The difference between life and the movies is that a script has to make sense, and life doesn’t.
—Joseph L. Mankiewicz

Well, let them talk. I can take it. Only one person can hurt me. Her name is Ida Lupino.
—Ida Lupino

My advice is not to wait to be struck by an idea. If you’re a writer, you sit down and damn well decide to have an idea.
—Andy Rooney

To gain your own voice, you have to forget about having it heard.
—Allen Ginsberg